Movie Review: “Dolemite Is My Name” 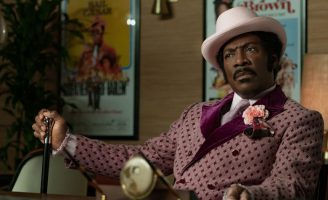 It’s the mid-1970s, and record shop assistant manager Rudy Ray Moore (Eddie Murphy) desperately wants to be a star, but can’t even get the in-store DJ to play his songs. He’s also having no luck doing standup comedy as the opening act for a band at a neighborhood bar. But one day, after listening to some old winos tell funny, outrageous stories, Rudy decides to transform himself. The next time he takes the stage, he’s become Dolemite, a brash reciter of raunchy poetry, full of ego and swagger, wearing flashy clothes and wielding a cane. He’s a hit.

Soon, Rudy/Dolemite is making what were then called “party records,” a genre of comedy albums labeled “For Adults Only.” They weren’t distributed in mainstream retail outlets, but sold under the counter and in black neighborhoods, where people would gather in someone’s apartment to listen to x-rated comics like Redd Foxx, LaWanda Page, and Rusty Warren. Rudy’s a surprise hit on vinyl, too, so he takes off on a tour of the Chitlin’ Circuit (the black equivalent of the Borscht Belt) and develops even more of a following.

Still not satisfied, Rudy sets his sights on making a movie, an art form neither he nor his friends know anything about. But it’s the era of “blaxploitation,” and Rudy recognizes that as long as his fans see comedy, breasts, car chases, breasts, kung fu fights, and more breasts on screen, they’ll line up at the box office. The second half of “Dolemite Is My Name” tracks the making of the movie, which is so low-budget, amateurish, and schlocky it rivals some of Ed Wood’s work.

Yet the project is not at all out of sync with the kind of titles that made up that genre (e.g. “Superfly,” “Black Caesar,” “Truck Turner,” “Sweet Sweetback’s Baadasssss Song”). I re-watched Pam Grier’s classic “Foxy Brown” a couple of years ago, and found it to be remarkably stupid — yet somehow entertaining, while containing exactly those elements Rudy claimed were the keys to success on screen. Many of those films never crossed over to white moviegoers, but they were very successful with their target audience.

Murphy is perfect as Rudy, the brashest and meatiest persona he’s played since James “Thunder” Early in “Dreamgirls,” way back in 2006. The confidence and timing he displays are reminders of some of his earliest, classic characters (e.g. Reggie Hammond, Axel Foley, and Billy Ray Valentine). Though it was directed by Craig Brewer and written by Scott Alexander and Larry Karaszewski, you can see Murphy’s fingers at the controls in every scene of “Dolemite Is My Name.” That’s good, since he retains an uncanny sense of showmanship and character as we follow along on Rudy’s journey.

The terrific supporting cast includes Craig Robinson, Wesley Snipes, Keegan-Michael Key, Tituss Burgess, Mike Epps, and Da’Vine Joy Randolph (she matches Murphy in every scene they share). There are a couple of cameos I won’t spoil, but everyone looks like they had a helluva lot of fun making this movie.

By the way, if you think the story is too ridiculous to be true, you’ll be blown away by scenes at the end that show the real Rudy Ray Moore in the first of his “Dolemite” movies (yes, there were sequels), and at how well Brewer matched the look and tone of that footage with this re-telling of Moore’s story. Though the settings are markedly different, Brewer (along with cinematographer Eric Steelberg and production designer Clay A. Griffith) captures the feel of the era as well as Quentin Tarantino and his crew did in “Once Upon A Time In Hollywood.”

“Dolemite Is My Name” will be on the big screen in St. Louis for one week starting today, then on Netflix, which financed it. It will likely draw more than a few Murphy fans to the box office, but will have even greater success, well deserved, on the streaming platform for years to come. If Netflix were smart, it would also buy the rights to stream Moore’s original “Dolemite,” so modern audiences can see the real thing in action.