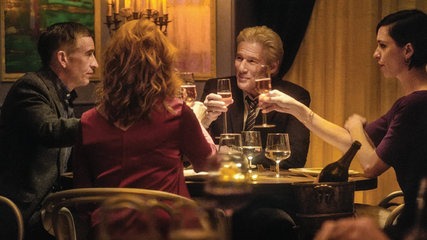 In “The Dinner,” Richard Gere is a Congressman running for Governor, Steve Coogan is his brother, a failed teacher with mental issues, and Laura Linney and Rebecca Hall are their wives. They go to dinner at one of those restaurants where the food is way fancier than it needs to be — where the maitre d’ comes over with each course to explain every little detail of the dishes that have just been placed on the table.

Meanwhile, the two couples are meeting to discuss what to do about their sons, who together have committed a horrible murder of a homeless person in an ATM vestibule. Will they cover it up or tell the authorities? There are flashbacks where we see what the boys did and how these rich people lived their lives before all of this.

The problem is there’s no one to root for in “The Dinner” (except for the homeless victim). Neither the adults nor their sons are anyone I’d want to spend time with, and the whole thing seems staged more like a play than a movie, with a few conversations pushed outside the restaurant for no reason. The whole thing is way too slow, and the score is overwrought and distracting.

“The Dinner” is an American remake of an Italian movie based on a book by a Dutch author, written and directed by an Israeli (Oren Moverman, who wrote “Love and Mercy” a few years ago and also produced the other Richard Gere movie that opened this week, “Norman”). Perhaps what went wrong was some sort of cinematic version of the game of telephone where, by the time the message is translated through enough people, it makes no sense and has no value.

Even though I’m a fan of all four of the principal actors in “The Dinner,” I can’t recommend it. I give it a 2 out of 10.

Note: I’m not the only one who didn’t enjoy this movie. According to IMDb:

The author of the book ‘The Dinner’, Herman Koch, walked away from the European premiere in Berlin on February 10, 2017. He did not wish to stay for the after-party, nor talk to the director, cast members or audience. The reason was that he did not like the movie at all, mostly for the script which he thought had transferred his cynical story into a moral tale. Of the three movies made from his book, “this one is easily the worst”, Koch said to Dutch newspaper NRC (Feb 11, 2017). “That after-party would have been rather awkward. What would I have done? Shake hands with everybody and tell them I hated their movie?” Koch disliked the movie’s reference to themes like American violence and the stigma of mental illness. “That ‘didactical’ tone, isn’t it killing?”, Koch said.