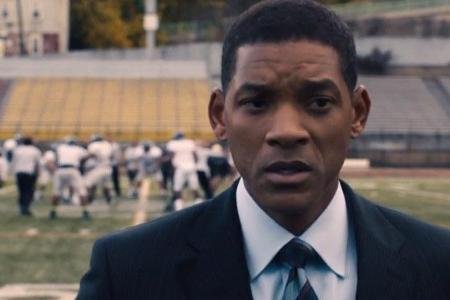 I’ve spent plenty of time talking on the air about the concussion crisis in the NFL and the league’s efforts to cover it up. Two of my best guests on this subject were pediatric concussions expert Dr. Robert Cantu and “League Of Denial” author Mark Fainaru-Wada. The latter wrote extensively about forensic pathologist Dr. Bennet Omalu, who was the first to identify chronic traumatic encephalopathy (CTE) and link it to the brain damage that comes from the regular head-bashing of professional football players. That was more than a dozen years ago.

In the terrific movie “Concussion,” Will Smith plays Omalu, who felt the full force of the NFL come crushing down on him when he went public with his findings. It tried to discredit him as a fraud and presented evidence from scientists paid by the league that found no causal link between playing football and brain damage (echoes of tobacco “scientists” who found no link to lung cancer, as well as modern day climate change deniers funded by Big Oil).

The NFL maintained that position until Congress investigated in 2009, when it finally acknowledged the connection and began making some rule changes to address the problem. Meanwhile, Dr. Omalu’s findings have been confirmed by Dr. Ann McKee and her team at Boston University, who studied the brains of 79 deceased NFL players — and found CTE in 76 of them.

Much of “Concussion” was filmed in Pittsburgh, because it was while investigating the death of Steelers legend Mike Webster that Omalu found the first evidence of CTE in his brain. A year later, he discovered it in another Steelers veteran, Terry Long, who killed himself at 45, but had a brain that looked like a 90-year-old Alzheimers patient. The movie details their stories, as well as other ex-NFL players whose lives were ruined by years of concussive hits on the field.

Smith is excellent in the lead role, adopting Omalu’s Nigerian accent and bringing both intensity and pathos to the role. Always a star on screen, Smith suppresses his fun-loving side to play Omalu as a serious scientist disturbed first by what he found and second by the league’s attacks on him. The supporting cast includes Albert Brooks as Omalu’s mentor, Alec Baldwin as a former team doctor who joins his fight, and Luke Wilson as NFL commissioner Roger Goodell. You can be sure that the NFL is not happy about the movie, which will reopen a national discussion of the league’s cover-up and denial.

My only complaint about “Concussion” is that the plot veers off into Omalu’s personal life, including meeting a Kenyan nurse who becomes his wife. The scenes are fine, but somewhat distracting to the central part of the story — a man of integrity taking on a corporation that lied to its employees about the health effects of their jobs.

By the way, “League of Denial,” the expose written by Mark Fainaru-Wada and his brother Steve Fainaru, was turned into a riveting documentary that aired on PBS in 2013 as part of its “Frontline” series. You can watch the entire thing here.


Also: here’s an interview with Dr. Bennet Omalu about “Concussion.”