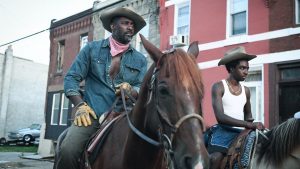 I’ve never been a fan of horseback riding or racing, both of which seem cruel to me. I’m willing to justify it in an old west setting, when there were no other means of transportation, but that era has long past.

I’m especially revolted when I see horses clip-clopping along city streets to take tourists on a carriage ride. Why anyone would want to sit there and look at the rear end of a horse for an extended period is beyond me. But worse is thinking about the horse walking on the unforgiving pavement, not exactly its natural habitat. It can’t be any more comfortable for them than it would be for a human being forced to walk on warm, sticking-to-your-shoes, not-yet-hardened asphalt all the time. The whole idea is inhumane.

Nonetheless, I decided to put my feelings aside to watch “Concrete Cowboy,” a new Netflix movie about Cole (Caleb McLaughlin), a rebellious teen from Detroit who is sent by his fed-up mother to go live in Philadelphia with his father, Harp (Idris Elba). When he arrives, Cole discovers that Harp is part of a community of urban cowboys — and not the kind portrayed by John Travolta four decades ago. This is the Fletcher Street Urban Riding Club, a group of Black men and women who keep horses in stables in a lower-class part of the city. They care for the horses, take them out to graze in a nearby park, and occasionally ride them. The club has a long history in the north end of Philadelphia, where there used to be several similar organizations with their own stables.

At first repulsed by being forced to shovel horse dung out of stalls and having to share Harp’s house with a horse named Boo, Cole eventually comes to respect the animals and the people who oversee them. However, he also gets mixed up in some shady business with Smush (Jharrel Jerome), a drug-dealing old friend he falls back in with despite his father’s disapproval. If you don’t know how that situation is going to end up, you just haven’t seen enough movies.

The worst thing about “Concrete Cowboy” is that it doesn’t have nearly enough Idris Elba or Lorraine Toussaint (she co-stars as a neighbor who’s a longtime member of the riding club). When those two names are attached to a project, my hopes are raised because they always give very good performances. But director/co-writer Ricky Staub underutilizes them to the point where long stretches pass with neither of them anywhere in sight.

In case the overriding theme of the movie doesn’t hit you over the head, there’s this line from a rider named Esha (Ivannah Mercedes), who tells Cole after he spends a rough night sleeping in the stables, “Horses ain’t the only thing that need breaking around here.”

There’s probably a good documentary to be made about the century-long tradition of the actual concrete cowboys of Philadelphia — and the history of Hollywood whitewashing Black cowboys out of every cinematic depiction of America’s past — but this fictionalized story is nothing more than a badly edited, too predictable, big snooze. Staub and cinematographer Minka Farthing-Kohl seem to have been more interested in getting beauty shots of sunsets than telling a compelling story. Throughout most of it, I felt like I was slogging through that hot, sticky asphalt, just trying to get to the end credits (which show the real-life members of the Fletcher Street club, some of whom appeared in the movie).

I’m giving “Concrete Cowboy” a 3 out of 10, which means it’s likely to end up on my Worst Movies Of 2021 list. Now streaming on Netflix.

By the way, there was a made-for-television movie in 1979 called “Concrete Cowboys,” about two fish-out-of-water cowboys from Montana who somehow got mixed up in a murder mystery in Nashville. It starred Jerry Reed, Tom Selleck, and Morgan Fairchild, with cameo appearances by Claude Akins, Roy Acuff, Barbara Mandrell, and Ray Stevens. By all accounts, it was a world-class piece of the stuff Cole mucked in the stables.