Movie Review: Before I Fall 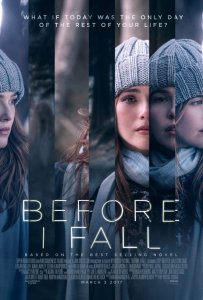 Samantha wakes up at the same time to the same song playing on the radio and relives the same day. Okay, so it’s a remake of “Groundhog Day.”

Samantha wakes up every day and rides to school with her three best friends, all privileged, upscale, cool teenagers who look down on everyone else. Okay, so it’s a remake of “Mean Girls.”

Samantha gets lots of roses from male admirers on “Cupid’s Day” at school, but doesn’t recognize that the guy she’s with isn’t right for her, while paying no attention to the guy who is. Okay, so it’s a remake of a dozen other teen romance movies.

Actually, “Before I Fall” takes all three of those plotlines and meshes them into a story that kinda works, thanks to Zoey Deutch, who plays Samantha. Deutch, who played James Franco’s love interest last year in “Why Him,” imbues Samantha with a humanity that isn’t apparent at first, but grows as she keeps reliving one tragic day in her young life. Unfortunately, the rest of the movie isn’t as good as she is, and falls easily into plot traps straight out of those other movies.

“Before I Fall” also lacks a sense of humor, which is what kept “Groundhog Day” and “Mean Girls” grounded. As Samantha wakes up yet again, fully knowing that she’s going to encounter the same situations she did yesterday, she still dresses the same way and acts the same way, even as she’s learning she must become a better person. The movie is quietly preachy in that way, and the supposed-to-be-a-shocker ending doesn’t deliver.

Granted, since I’m neither female nor a teenager, I’m not the target demo for this movie, but anyone who fits into those groups would be better off watching the movies that “Before I Fall” rips off. I give it a 5 out of 10.