Movie Review: “All The Old Knives” 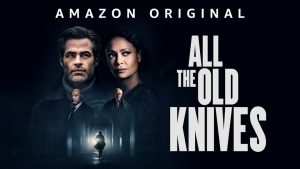 As “All The Old Knives” opens, a group of jihadists have hijacked a Turkish Airlines plane in Vienna. While Austrian authorities react, so does the CIA, whose local operatives try to work every angle to keep the situation calm and keep the passengers — particularly Americans — alive. Unfortunately, everything goes awry and everyone on the plane, including the terrorists, ends up dead.

Eight years later, the tragedy resurfaces when Vienna bureau chief Vick Wallinger (Laurence Fishburne) discovers there was a mole in the agency who might have helped the hijackers. He tasks longtime operative Henry Pelham (Chris Pine) with interrogating everyone who was involved to uncover the truth.

One of those is Bill Compton (Jonathan Pryce), who seems exceedingly nervous and shady when Henry talks with him in a British pub. Another is former agent Celia Harrison (Thandiwe Newton), who was not only one of the top people in the bureau, but also Henry’s lover at the time. After the airport incident, they drifted apart, and she left the agency, married, had kids, and moved to Carmel-By-The-Sea, California. She agrees to sit down with Henry at a super-trendy restaurant with a fantastic view but not a lot of other patrons.

During that conversation, we see flashbacks to their relationship, both on and off the job. Unfortunately, director Janus Metz felt it necessary to include a scene of Celia and Henry having sex in their apartment. It’s far too intimate and seems to take up several minutes of screen time for no reason other than titillation. We certainly didn’t need it to establish the idea these people kept secrets from the rest of the world, but not each other.

The pacing of “All The Old Knives” gets sluggish at times, like a John LeCarre slow-moving thriller. However, I was never distracted, but rather sucked right into the plot because the cast is so solid. With this movie, Pine deepens his resume as a leading man, and Newton matches him stride for stride in their scenes together. Pryce is one of those actors who commands attention in every role he plays, and his work in “All The Old Knives” is no exception. Fishburne isn’t given a tremendous amount to do, but is as reliable as he always is when playing an authority figure, which has become his lane at this stage of his career.

The most frustrating thing about “All The Old Knives” is that, when it was over, I had no idea what the title meant. Still, I’m giving it a 7 out of 10. Begins streaming tomorrow on Amazon Prime Video.

By the way, I did not know until now that Thandie Newton had changed her name back to Thandiwe, which is how it was spelled at birth. She dropped the “w” at an early age because it caused problems for her at school, but brought it back proudly in April, 2021.