Movie Review: “A Journal For Jordan” 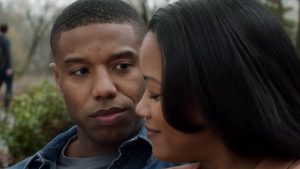 Denzel Washington directing a movie starring Michael B. Jordan sounds enticing. Too bad the result, “A Journal for Jordan,” is trite, predictable, and manipulative.

The movie is based on a best-selling memoir by Dana Canedy, whose fiancée, while deployed in Iraq, kept a journal full of advice for their very young son. But the journal merely serves as a framing device for screenwriter Virgil Williams to tell a cliché-riddled tale of romance between New York Times reporter Dana (Chanté Adams) and professional soldier Charles (Jordan).

Though there is some chemistry between Adams and Jordan — two very attractive people given nothing interesting or amusing to say — there isn’t a whiff of originality or cleverness in the storytelling, nor a single plot point I didn’t see coming. The only memorable moment occurred when Jordan’s naked rear end appeared on screen and the women in the audience loudly responded with the same contented moan they made when Brad Pitt took off his shirt in “Once Upon A Time In Hollywood.”

In 1993, there was a tear-jerker called “My Life” which starred Michael Keaton as a terminally ill man who used a camcorder to record himself for his as-yet-unborn child. It was appropriately emotional and featured very good performances by Keaton and Nicole Kidman as his wife. But even with a supporting cast of Queen Latifah, Bradley Whitford, and Michael Constantine, it didn’t do much at the box office and faded from theaters fairly quickly.

“A Journal for Jordan” isn’t nearly as good, coming off more as a TV movie you’d expect to see in the listings for the Oprah channel. Worse, the pace drags considerably at several points over its 131-minute runtime.

I give “A Journal for Jordan” a 3 out of 10. Opens this weekend in theaters.