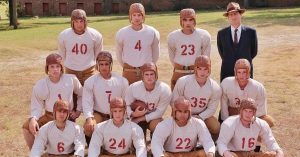 If you took every cliché from every underdog sports movie — even if they were based on true stories — and rolled them into one, you’d have “12 Mighty Orphans.”

“12 Mighty Orphans” is the story of the Mighty Mites, the football team of an orphanage in Fort Worth, Texas, during the Great Depression. Their new coach is Rusty Russell (Luke Wilson), who has given up a lucrative career at Temple University to teach and create a football program at the orphanage. But he’s up against the odds.

In real life, coach Russell had to innovate, because his players were so small they couldn’t take on the much larger boys on the other side of the line of scrimmage. So, he created the spread offense and moved the ball by passing downfield, a new concept at the time. The Mighty Mites’ unusual strategies and plucky spirit became an inspiration to their town, the state, and eventually the country, thanks to sportswriters and editors who played up their success so that downtrodden readers during the depression had something to root for.

Stories like this only work if the boys have lots of obstacles to overcome. There are only a dozen boys who qualify academically to play on the team. They don’t have shoes. Hell, they don’t even have a football. But they have the orphanage’s kindly old Doc Hall (Martin Sheen), who serves as assistant coach — and doesn’t even take a salary for his work. They also have a big bruiser, Hardy Brown (Jake Austin Walker), who doesn’t want to play football, but gets talked into it and becomes the team’s most dependable player.

As if that weren’t enough, director Ty Roberts and his co-screenwriters Lane Garrison and Kevin Meyer keep piling it on, including more than a half-dozen inspirational speeches and two scenery-chewing villains. One is Frank Wynn (Wayne Knight), the head of the orphanage, who secretly uses his wards as child labor to run a printing business in the basement. He’s opposed to this whole idea of a football team, but seemingly enamored of using corporal punishment in the form of a paddle he swings at the boys’ butts anytime they break a rule. Although Wynn has a thin mustache, Knight overplays him as if it were long enough to twist at both ends, a la Snidely Whiplash.

The other villain is Luther (Lane Garrison), coach of a rival team who not only wants to grind the Mighty Mites into the ground, he doesn’t even want them to be allowed to play in his league. Garrison barks out every one of his lines with such ferocity even Al Pacino would tell him to turn it down a couple of notches.

Of course, neither of the bad guys, nor any of the other teams in the league, can stop the Mighty Mites on their way to the state championship. Telling you that might seem like a spoiler, considering the dramatic buildup to whether they can get that far as the movie unfolds. But Roberts and his screenplay blow it by opening up with a scene from halftime of that big game — so in the first minute, we already know the orphans will get there!

As for the cast, all the boys are fine, although many of them get short shrift from the screenplay. So is Wilson as the coach. Sheen does nothing new with his kindly old guy with a flask in his pocket. The supporting cast includes Treat Williams, the comic Ron White, and Robert Duvall (who has a blink-and-you’ll-miss-him tiny role that’s entirely unnecessary). Vinessa Shaw has the thankless role of the coach’s wife who’s given virtually nothing to do.

The true story of the Mighty Mites has already been told in a book by Jim Dent. With that as source material, it would have made a good episode of ESPN’s “30 for 30.” But in the hands of Roberts et al, it becomes an overblown, cliché-riddled melodrama that’s as dry as the Texas landscape it depicts.