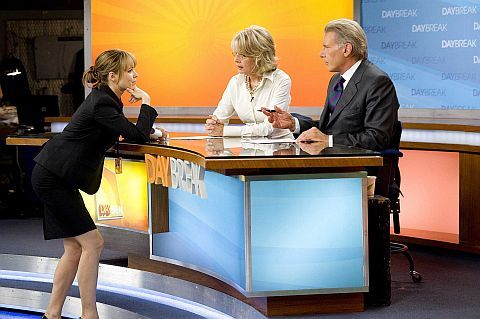 I’m not sure why, but I saw the new movie “Morning Glory” today. I probably went because I’m a sucker for movies about broadcasting (the business I’ve spent my entire adult life in) and, more specifically, behind-the-scenes in television news, an industry my wife used to work in. The two titles that stand as far and away the best of the genre are “Network

.” “Morning Glory” has more to do with the latter than the former because it’s also a romantic comedy, but it’s no competition for either.

Rachel McAdams plays Becky, producer of a low-budget early morning TV news show in New Jersey. Whoa, wait a minute, what? The fact checker in my brain sent out a red alert because, in the real world, there are no broadcast television outlets in the Garden State — viewers in the northern part of the state watch the New York stations, those in the southern part of the state watch the Philadelphia stations. It doesn’t matter, though, because we’re out of NJ soon enough as Becky is fired from that station and ends up across the Hudson River in New York City as new executive producer of the IBS network’s morning show, which runs a distant fourth behind “Today,” “GMA,” and “that thing on CBS, whatever it’s called.”

On her first day, Becky fires the male half of the morning team and sets about convincing legendary evening news anchor Mike Pomeroy (Harrison Ford) to take the chair next to Colleen Peck (Diane Keaton). While Keaton pulls off the Diane Sawyer role very smoothly, Ford plays Pomeroy (or the character was written) as a cross between Tom Brokaw, Charles Gibson, and a man with a severely impacted colon — no humanity, no sense of humor, just pure bitter bastard — and that’s not what we want from Harrison Ford.

From there, the plot is entirely predictable and finishes with a character pulling a complete personality reversal for no reason other than to bring the story to a happy ending. Despite McAdams’ cuteness and likability, Keaton’s solid silliness, some scene-chewing from Jeff Goldblum, and nice supporting work from John Pankow (Paul Reiser’s brother Ira on “Mad About You“), I walked out of “Morning Glory” feeling the same way I do after watching any of the actual morning TV news shows — wondering why I’d gotten so little out of the last two hours.

As for the reaction of someone in the industry, read this piece by Shelley Ross, who was the only female executive producer of a real morning news show in almost 25 years (“Good Morning America”).