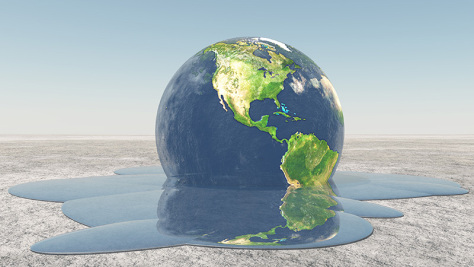 Last week, James Hansen, NASA’s former lead climate scientist, released a new study saying that sea levels will rise faster and sooner than previously believed — possibly 10 feet in the next 50 years. That seemed like a major news story to me, but I didn’t see much coverage of it, so I invited another climate expert, Michael Mann, to return to my show today to discuss Hansen’s report and its impact.

We talked about how glaciers are melting at a higher rate than previously predicted, and what that will mean for coastal cities both in the US and around the world. Mann also explained what the more severe climate change is already doing to our weather in the midwest, and how’s it’s related to the drought in the southwest. We discussed what this will mean for populations in places like Miami and New York, which will have to migrate inland, and how that will affect the rest of us.

I asked Mann if we’re past the tipping point where nothing can be done to save us from a cataclysmic future for our children and grandchildren, and on that point, he seemed more optimistic than I expected. Even with a Congress full of deniers like James Inhofe (who doesn’t understand how climate change and snowballs can co-exist), Mann praises moves done by President Obama by executive order that are at least taking us in the right direction, if not far enough.

One of Mann’s most important points is that, congressional deniers aside, the Pentagon is seriously worried about climate change because of the consequences on populations around the world, and the risk that more wars will break out when the supply of fresh water shrinks as sea levels rise. And on that global front, we talked about the upcoming global climate summit in Paris in December, where world leaders are scheduled to negotiate a plan to cut back on carbon emissions. Maybe.

I always enjoy talking with Mann because he’s so good at putting this difficult area of science into language that the rest of us can understand. Listen, then click here to subscribe to these podcasts via iTunes!