McCain On The Dole 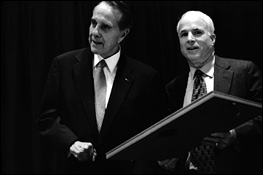 One of the things that has hurt McCain the most this year is abandoning the friendly image he’d cultivated through years of media appearances. Reporters liked him, talk show audiences cheered him, hosts laughed at his jokes.

But by taking the ugly personal attack route, he’s gone down the same path Bob Dole took in 1996. Like McCain, Dole’s positives were very high right up until he became The GOP candidate Who Attacks. He was behind, and he allowed his handlers to push him into a campaign strategy he clearly wasn’t comfortable with. It seemed very un-Dole like to a lot of people, and it caused impressionists like Norm McDonald to play up the Mean Old Man stereotype he had turned into, instead of the Respected Senator With A Sense Of Humor he had been.

That’s exactly what happened to McCain this year. By listening to Steve Schmidt and other Karl Rove wannabes, he destroyed his goodwill. Whether he can get any of it back remains to be seen — perhaps tomorrow night on Letterman.

If not, look for John McCain to continue following in Bob Dole’s footsteps with a series of commercials for Pepsi and Viagra in 2009.