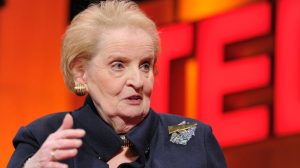 With the news of the death at 84 of former Secretary of State Madeleine Albright, I dug into my audio archives to find a conversation I had with her on January 15, 2008, when she published her book, “Memo To The President Elect.”

I asked her why she appeared behind Hillary Clinton after the Iowa caucuses, but was nowhere to be seen on the night of the New Hampshire primary, and had her explain her role in the Clinton candidacy. We also discussed what the end game should be in Iraq, what she thought the US could do about Iran, and how dangerous the situation in Pakistan was.

I also asked Albright why the US continued to suck up to the Saudis, just because of the black goo under their sand. That was prompted by then-President George W Bush announcing he’d allow the sale of $20 billion worth of weapons to Saudi Arabia — with no strings attached regarding their continuing history of allowing Wahabbist madrassahs to preach hatred of the United States, or their terrible record on human rights regarding women.