Mad As Hell About “Network” 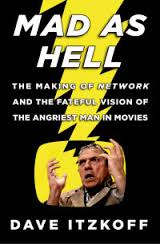 Paddy Chayefsky’s “Network” is a movie classic. The 1976 film put the phrase “I’m mad as hell, and I’m not going to take it anymore” into our lexicon. It also won four Academy Awards and a place on many Best-Ever lists.

Today on America Weekend, I talked with Dave Itzkoff, culture reporter for the NY Times, about his new book, “Mad As Hell: The Making Of Network and the Fateful Vision of the Angriest Man in Movies.” Itzkoff explained how Chayefsky had more power than most other screenwriters, with his name above the title and authority on the set over everyone, including director Sidney Lumet. We discussed the film’s foreshadowing of today’s cable news talking heads and talk radio hosts, and what modern day broadcasters and filmmakers told him about the movie’s impact and legacy.