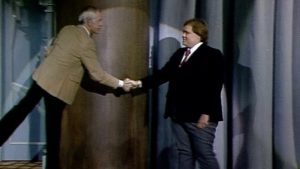 I never had the pleasure of interviewing Louie Anderson, but I met him seven years ago after seeing his show at an off-strip casino in Las Vegas. I was surprised he wasn’t playing somewhere more prestigious, but at the time, his career was in kind of a lull before he got a boost in 2016 from the FX series “Baskets,” in which he played Zach Galifianakis’ mother.

This was not the first time I’d seen Louie. He got my attention with his amazing first appearance on “The Tonight Show Starring Johnny Carson” in November, 1984, getting some of the biggest laughs — from both the audience and Carson himself — I’ve ever heard for a TV debut. Carson was so impressed, he told Louie to come back out through the curtain for another round of applause (which the crowd gave him enthusiastically), and then shook his hand. It was one of those recognizably career-making moments comedians of that era longed for.

If you go back and watch that set, you’ll see Louie doing two different things. He started with a series of jokes about his weight, each a single line, perfectly crafted and delivered. It was a skill he honed writing for and working with his mentor, Henny Youngman, a master of the one-liner. Then, halfway through the five minutes, Louie switched into storyteller mode, sharing observations about his family, especially his father. The crowd loved all of it.

About a year later, I was working in New York and Louie was booked at Caroline’s, a showcase comedy club. We got tickets and, from the moment he uttered his standard opening line — “Let me move this microphone stand so you can see me” — he had the crowd in the palm of his hand. We were sitting in a banquette where, at one point, I laughed so hard, I hit my head on the wall behind us.

Thirty years later, there I was, watching Louie work again. There were only about 30 of us in the room. When he came out, he said nothing about the sparse corps of spectators, just sat down on a big, overstuffed chair and started telling stories, interspersed with some crowd work.

I never sit near the stage because I have no desire to become part of the show — I’m there to observe and enjoy myself — but those who were up close were pulled into Louie’s world for an hour or so, and loved it. Like Paula Poundstone and Patton Oswalt, he was very good at interacting with them and coming up with clever lines very quickly (for an example, read the obit my friend Mark Evanier wrote for Louie). Most importantly, I could see him sense when he’d gotten all he could out of one person before moving on to someone else. A real pro.

After the show, I noticed Louie in the gift shop nearby, autographing pictures and other merchandise. I patiently waited until other folks had gone through the line, then wandered over, complimented him on the show, and chatted for a couple of minutes. At some point, I asked why he wasn’t playing a higher-profile venue.

With a smile on his face, Louie explained that this casino had given him a full-year contract (which meant he didn’t have to travel to one-night gigs around the country), as well as a beautiful hotel suite to live in and a nice, big, flat fee regardless of how big the audience was. Plus, he liked the more intimate feeling of that room, as opposed to one of the big showrooms on the strip. He could not have been nicer or more willing to engage, an impression I’ve seen echoed across the outpouring of memories of Louie on social media.

Louie died this week of cancer at 68. He was a big man with a big talent, gone too soon.