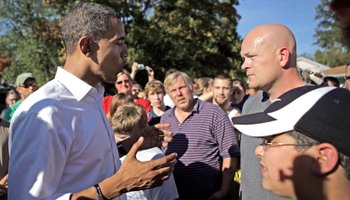 Line Of The Day comes from Mark Evanier:

I just turned on the news and saw “Joe the Plumber” doing something that Sarah Palin apparently can’t do. He was answering questions at a press conference.

Speaking of Joe Wurzelbacher, I said last night that he’d better have a pretty clean record, because the media was going to run him through the wringer. They did that today, and discovered that he doesn’t have a plumber’s license, he owes the state of Ohio over $1,100 in back taxes, and he would not have over a quarter million in profits from the plumbing business he wants to buy — so he would actually get a tax cut under Obama’s proposal.

Of course, the facts won’t stop McCain from using Joe as the hero of his stump speech. After all, the candidate vetted the plumber about as much as he did his running mate.

Joe is the Plumber To Nowhere.