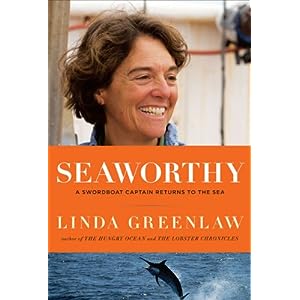 In 1991, Linda Greenlaw was the captain of the Hannah Bowden, sister ship of the ill-fated Andrea Gail, the boat that went down with its entire crew in “The Perfect Storm.” That incident was the basis for Sebastian Junger’s book in 1997 and the George Clooney/Mark Wahlberg/Diane Lane movie in 2000 (with Mary Elizabeth Mastrantonio playing Greenlaw). She gave up that life for a decade, choosing to work closer to shore as a lobsterman and author, but she headed back out to sea a couple of years ago to resume her career as the only female captain of a swordfishing boat, which she writes about in her new book, “Seaworthy.”

Today on KTRS, I talked with Greenlaw about what it was like to go back to that job after ten years away and, because I’m always fascinated with the process behind unusual jobs like hers, had her explain just what she and her crew did every day to catch those fish. We also discussed the day she almost lost a crewman to a storm at sea, why she was imprisoned in Canada for fishing in the wrong waters, and how she felt about her portrayal in the movie.