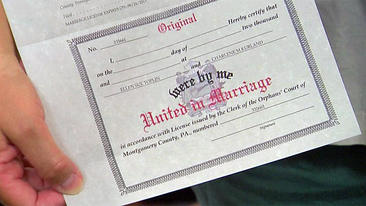 Angela Giampolo returned to my America Weekend show to discuss a story from the suburbs of Philadelphia, where a county executive is issuing marriage licenses to same-sex couples, even though it’s illegal in the state of Pennsylvania. She explained whether those licenses are valid, the legal arguments for and against issuing them, the impact of the state’s politics on those couples, and who will marry them now that they have licenses. Listen, then click here to subscribe to these podcasts via iTunes!