Let Down By Bond, Again 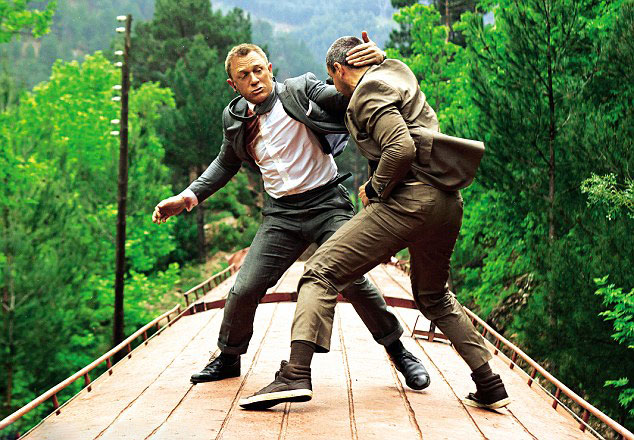 I’ve been a sucker for James Bond movies for decades. I don’t mean that I’ve liked them all. To the contrary, more often than not, I have walked out of the theater mad at myself for wasting another two hours. Yet every time a new one comes out, I find myself in a seat with a popcorn and soda hoping this will be one of the good ones.

“Skyfall” isn’t. It’s not horrible, but it’s not what it should have been. In fact, the whole series has abandoned what Bond has traditionally been — an agent with special abilities, a superb intellect, worldly style, and more than a bit of wit, armed with some really cool gadgets and strikingly attractive female companions while taking on a clever megalomaniacal villain who wants to rule the world. But with Daniel Craig in the lead, Bond has turned his back on the wit and gadgets to become The Terminator.

For a guy so skilled with a gun, this Bond engages in far too many fistfights, the kind where no matter how often he’s punched or kicked or strangled or knocked down, he pops right back up as if nothing has happened. He exists in the kind of action sequences where, anytime someone is pointing a gun at another at close range, the person without the gun moves so quickly that they knock the gun away, and as it skitters across the floor, another fistfight breaks out. Bond fights opponents on top of a train, in a tall building, in a tunnel, in a mansion, in a courtyard, and on and on.

The Terminator analogy even includes a scene where he uses a knife to cut into his own chest and dig some shrapnel out so that the lab can analyze where it came from. Craig owes Arnold Schwarzenegger a royalty for that one.

As for gadgets, the Bond of “Skyfall” is given only two — a gun only he can fire, and a GPS locator. At one point, Bond brings out his 1964 Aston-Martin DB5, to applause from the audience, which is happy to recognize a piece of history onscreen.  The car first appeared in “Goldfinger,” when it was packed with Bond-ian gadgetry (ejector seat, machine guns, smokescreen, rotating license plates, oil slick sprayer, etc.). The audience’s reaction isn’t simply nostalgia, it’s a recognition that gadgetry is elemental to a Bond film, and this one doesn’t have enough.

I won’t spoil the end of the movie for you, but I will say that, when the credits rolled, I heard that voice in the back of my head saying again, “Why did I bother?”