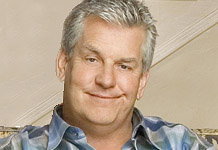 If you went to a comedy club in Boston in the 1980s, there was a 100% chance that you’d see either Lenny Clarke or Denis Leary onstage. Often, you’d get both of them, and maybe Steven Wright, too. Now, Leary stars on “Rescue Me” as firefighter Tommy Gavin, and his old buddy Clarke is part of the cast, as Tommy’s Uncle Teddy.

Clarke was on my show this afternoon to talk about the show, how his longtime friend Leary resisted giving him the job, and about the early days in those comedy clubs. I also asked Clarke about the recent controversy involving Jack McGee, who went public with his anger at Leary because he was unhappy that his character (Chief Jerry Reilly) committed suicide in last week’s episode.

We also discussed how Clarke contributes story ideas to “Rescue Me,” and a classic real-life story involving Clarke, a large amount of alcohol, a city bus, and his mayoral campaign.