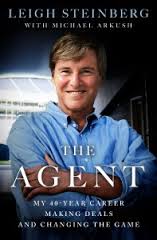 When Cameron Crowe was developing “Jerry Maguire,” he turned to Leigh Steinberg for advice on what the life of a sports agent was like. Steinberg was, arguably, the most famous sports agent in the world, representing over 150 pro athletes, including 8 number-one NFL draft picks. Now that he’s written about his life in “The Agent,” he joined me on America Weekend to discuss: