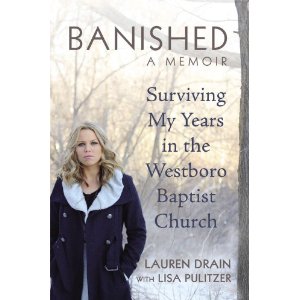 The cult that calls itself the Westboro Baptist Church is one of the most hateful and hated in America, mostly because of the pickets its members have staged, with virulently anti-gay messages on placards, at the funerals of soldiers and others across the country.

Lauren Drain was a member of that cult, dragged into it as a teenager by her abusive father, but as the group became more extreme, she eventually outgrew the hatred, began questioning the group’s beliefs, and was banished at age 22. Five years later, she has written of her experiences in “Banished: Surviving My Years In The Westboro Baptist Church,” which she discussed with me today on KTRS.

I asked her how the cult brainwashed her, whether she thought she was doing a good thing at those pickets, how other kids in high school treated her and other young members of the group, and where the money comes from to fund their extremist road trips. Since she’s not the only young member to have left in the last decade, I asked if she believes there to be a generational divide within the cult. She also explained how she has talked to some families of those dead soldiers since the book was published earlier this month.