Kevin Sites, In The Hot Zone 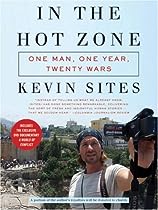 Kevin Sites has covered wars, disasters, and conflicts around the world, and has compiled some of the stories in “In The Hot Zone: One Man, One Year, Twenty Wars.”

This afternoon on my show, I talked with Sites about some of those adventures, including the infamous incident in Fallujah, where Sites videotaped a US Marine shooting an Iraqi prisoner. We discussed the fallout from that footage, the decision to air it in a censored form, and the international consequences of telling the story.

We also talked about covering the Indonesian tsunami, the role of the internet in his reporting, the impact of big-name network anchors going to disaster scenes to take over coverage of a story, and who is to blame for the lack of foreign news coverage in the American media.