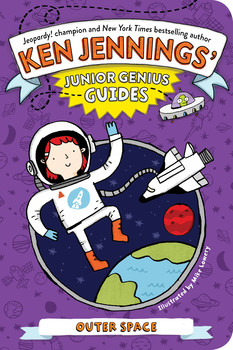 It’s been a decade since Ken Jennings appeared on 75 consecutive “Jeopardy!” shows and won $2.5 million (and more in several return visits for special tournaments). He writes a weekly trivia quiz for Slate, compiles the Kennections puzzle for Parade, and is the best-selling author of “Brainiac,” “Ken Jennings’ Trivia Almanac,” and “Because I Said So.” His “Junior Genius Guides” for kids 8-10 have covered Greek Mythology, US Presidents, Maps & Geography, and his newest is about Outer Space.

He joined me today on KTRS to discuss how he’s been interested in space since he was a kid and share some things about space that we don’t know. I asked him about feedback he gets from his young readers, including his children, Dylan and Caitlin. He also discussed his recent appearance on “Who Wants To Be A Millionaire?” and how “Jeopardy!” has changed since his first time around.