Just Give It To Ken 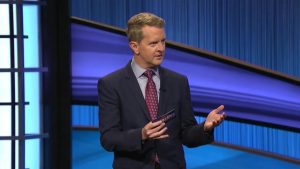 It’s both a pleasure and a relief to have Ken Jennings back behind the host podium on “Jeopardy!”

Mayim Bialik did a fine job — and got better over the course of her five weeks — but Jennings has matured as a host even more. He’s locked into both the fun and challenge of the game, and I bet his presence means more to the contestants. Some of them may get a thrill being in the presence of the actress who played Amy Farrah-Fowler, but if you’re a serious “Jeopardy!” fan who’s watched and studied the game for years, Jennings is tops in the Champions You Want To Meet category.

Whatever minor social media gaffes Jennings may have committed, they were not enough for Sony to stop considering him as the show’s permanent host.