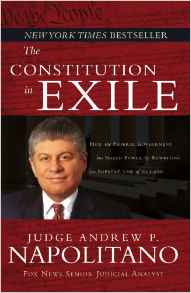 Fox News legal analyst Judge Andrew Napolitano was back on my show today to talk about his book, “Constitution in Exile” (a followup to “Constitutional Chaos”).

He expressed his anger at politicians who exploit their power to usurp the rights of Americans and ignore our natural rights. I also asked him how he feels about criticism of “activist judges” and why those who claim to want “limited government” are the same ones who keep increasing the federal government and its reach. Judge Nap has made some enemies among the Republican leadership with his honest attacks on the Patriot Act, the domestic spying program, the No Child Left Behind program, and the Bush administration’s attempts to overrule the states on matters like assisted suicide and medical marijuana.