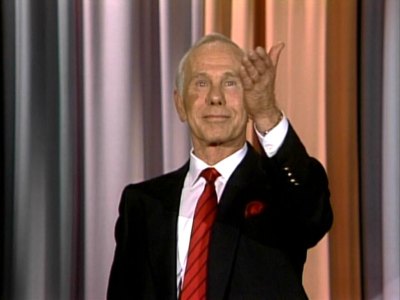 Twenty years ago today, Johnny Carson signed off on his final “Tonight Show,” leaving behind a legacy as the Most Famous TV Star Ever. Much has been written about him in the years since, particularly two weeks ago when PBS aired an excellent “American Masters” show about Carson’s career (if you missed it, the documentary is streaming here).

One thing the documentary did not mention was Johnny’s skepticism. He was the one who gave James Randi a national platform on “The Tonight Show” to expose charlatans like Peter Popoff and psychic surgeons and other paranormal con artists. I was riveted to those appearances, and thrilled years later when Randi told me that Johnny had been one of the biggest benefactors of the James Randi Educational Foundation, even making arrangements to have his charitable foundation continue to offer financial support even after Johnny’s death.

In the three decades Carson sat behind the desk, lots of people dreamed of sitting down in the chair next to him. Including me.

As a teenager, and then later as a semi-famous radio personality, my conscious brain knew I had no chance of getting there, because I was not a movie star, a standup comedian, an author, or any of the show business categories that might qualify one for a guest spot. But my subconscious had other ideas, and they snuck into my dreams late at night, even after Carson concluded his remarkable run. I’d picture myself joking around with Johnny on the set, or hanging around with him backstage in his office, or sitting on the couch ad-libbing during another guest’s segment. Pure fantasy stuff that I never believed in real life, but acted out in my sleep.

While mine were purely subconscious, the dream of appearing with Carson was very real for dozens of standup comedians. A spot on his “Tonight Show” followed by Johnny flashing a smile and an “ok” sign to the comic were enough to launch careers, as it did for so many. One night they were sleeping in their cars and begging for an unpaid slot on the Comedy Store stage, but the night after doing Carson, they were being booked at clubs all over the country for real money.

Because the audience could see that Carson was openly rooting for the comedians to do well, they were almost always very supportive. They wanted to be able to tell their friends they were watching the night a new comedy star exploded onto the scene. For some of those comics, it was a step towards a long stand-up career or a sitcom or other fame and fortune. For others, it was the single high point of their lives. Every comedian I’ve ever talked to who did that show remembers every detail of it.

One of my favorite stories about that experience came from Kevin Pollak who, as a guest on my radio show in 2007, explained how he did something unprecedented — he manipulated the “Tonight Show” booking process so that he could go right to the guest chair without having to do a standup spot first. Telling the comedy talent coordinator, Jim McCawley, that he was going to pass on a Carson booking until he could do it under his own terms was one of the ballsiest showbiz moves I’ve ever heard of. But it paid off a year or so later when Pollak, then appearing in Ron Howard’s “Willow,” finally did get the opportunity to sit on Johnny’s right, and when he did, he knocked it out of the ballpark.

You can hear that conversation here (note: the first half of the interview was about Pollak working to turn Buzz Bissinger’s book about Tony LaRussa and the St. Louis Cardinals, “Three Nights In August,” into a feature film — a project that, five years later, seems to have been shelved).