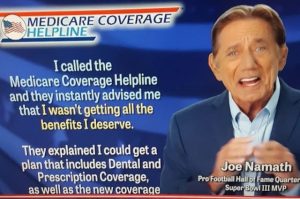 Late last night, flicking around the cable channels for no reason, I happened to see Joe Namath on a commercial for some Medicare coverage outfit, and wondered, “How is he still getting endorsement deals?”

It’s been five decades since Namath led the NY Jets to their only Super Bowl victory and 43 years since he played his last NFL game. The last time he was in the news was 2003 when, on the air, he drunkenly told ESPN’s Suzy Kolber, “I want to kiss you” — an incident so embarrassing he quit drinking thereafter.

The commercial in question isn’t exactly a prime endorsement, but I guess it would appeal to the demographic of people who remember Namath in his heyday. Perhaps he’s still considered a celebrity in the New York area, which is probably home to the company and/or ad agency that hired him, but across the rest of the country, not so much, and not for a long time.

Still, his appearance in the ad reminds me of the old joke with the punchline, “What, and give up show business?“