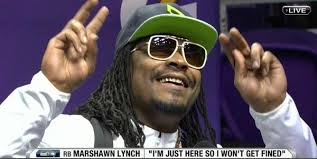 In the run-up to the Super Bowl, there’s been far too much discussion about the reticence of Seattle Seahawks running back Marshawn Lynch to engage with the press. Forget about the fines, forget about the monosyllabic answers, forget about his obfuscating by saying nothing more than “I’m just here so I won’t get fined.”

The truth of the matter is that Lynch, like 99% of other pro athletes, doesn’t have anything to say that matters. A long time ago, when Tony Kornheiser was a sports columnist for the Washington Post, he told me that he never went into the locker room to talk to the players, because he knew they wouldn’t give him a quote he could use (or care about). That’s not the case for beat writers, whose editors demand they get something from this quarterback or that power forward or that goalie, but almost always end up with a comment that offers no insight into the outcome or strategy.

Worse are the women who work as NFL sideline reporters and get very little airtime, but always get a 30-second slot in which they have to stop one of the head coaches as he runs to the locker room at halftime. The question is usually, “What does your team have to do in the second half?” The answer is always something along the lines of, “We need to keep the ball in their end of the field, contain their quarterback, not turn the ball over, and make big plays.” Wow, thanks coach, now back to Jim in the booth.

You’ll never hear a coach tell the reporter anything important, such as, “Tracy, one of the things we’re going to do in the second half is a trick play where I line up our punter behind the quarterback, then hike the ball directly to him and have him roll it slowly up to the center, who will run it in for a touchdown.”

Any good columnist or broadcaster who watches a game should be able to analyze what they’ve seen — without wasting time in the bowels of the stadium waiting for a player to tell him how tough it was to beat such a good team or other such nonsense. After all, the players are paid for what they do with their arms and legs, not with their mouths.