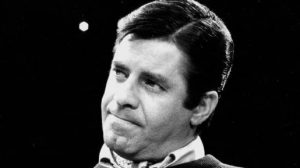 When Vanity Fair published its investigation into allegations about Jerry Lewis sexually harassing and assaulting a slew of women over the course of his career, my wife said, “He’s dead! Why do we need to know this now?”

My answer is for the same reason we should know Thomas Jefferson and George Washington were slaveowners, Henry Ford was a rabid anti-Semite, John Lennon abused women, and Bing Crosby beat his children. Death does not absolve anyone of horrible things they did while alive. Incidents like these must not be crowded out of anyone’s story, particularly when the results of their actions negatively impacted the lives of those they wronged.

For many, Lewis is remembered solely for his show business success and his work on behalf of people with muscular dystrophy. Other accounts portray him as a real son of a bitch, bitter and biting, and no fun to be around. To put it in terms of his own “Nutty Professor,” he was much more the bully Buddy Love than the timid Julius Kelp.

For Renee Taylor, Lainie Kazan, Karen Sharpe, Hope Holiday, and a bunch of other actresses, their memories of Lewis are filled with horror stories of locked doors, physical threats, and rape. Like the women in the Bill Cosby case, the victims couldn’t tell anyone because the man was so powerful, so they thought the truth would go to the grave with them.

It’s important that doesn’t happen. As attitudes have changed in the #MeToo era, survivors of such assaults have been more willing to come forward, and more likely to have their stories believed. Yet if you think these incidents belong only to a bygone era, I guarantee you there are plenty of modern-day women who have been preyed upon by men in their professional and personal lives. Revealing the truths of the past might give some of them the courage to come forward and reveal the 21st century equivalent of Lewis or Cosby.

As I read the piece on Lewis (you can find it here), I kept thinking how different it would be now to hear him screaming, “Hey, Lady!”