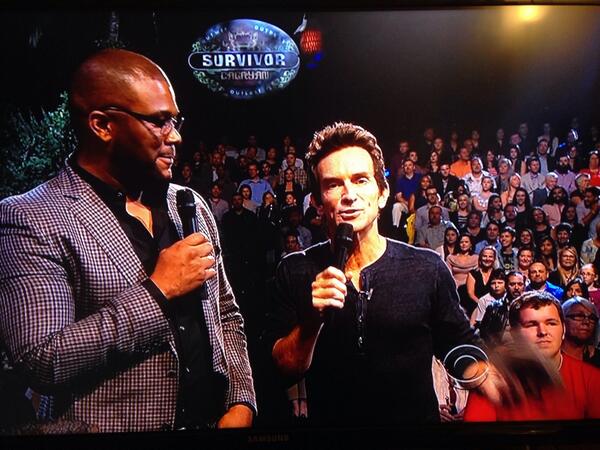 I have watched all 28 seasons of “Survivor,” a show that still has the most fascinating strategy-and-social-interplay combination of any reality/competition, as well as the best nature photography and editing on network television. The season that ended tonight ranks among the series’ best, with Tony The Cop playing a near-perfect game to win the well-deserved million dollars.

It was nice to see the jury, despite resenting Tony for eliminating each of them, recognizing that he played the game better than all of them, and not holding his lies and deception against him at the end. Too often the contestants who were voted off can’t get past their personal grudges to recognize how strategically well players like Tony have worked to outwit, outplay, and outlast all the rest.

The longer the show stays on the air, the bigger Jeff Probst’s ego gets. He seems to believe that people tune in to see him, rather than the players and the game. He couldn’t be more wrong. I’m not saying that Probst isn’t part of the reason the show’s been a success, but he’s not the main reason people tune in. No one is sitting at home waiting for him to utter the same lines he’s said dozens of times before, like “Immunity is back up for grabs”, “Are you ready to get to today’s challenge?”, “Want to know what you’re playing for?”, and “I’ll read the votes.”

Tonight, we saw Probst’s ego in overdrive, as he did live cut-ins during the 2-hour finale that were completely unnecessary and distracting from the plot line of a season that was building to an exciting finish. Then, during the “reunion” show (which should be called the “post-game” show), Probst spent more time on his personal likes and dislikes, plus interviews with audience members — including Tyler Perry*, who added less than nothing to the proceedings — than with the people who actually played the game. They are the ones who made this season so compelling, so hearing more from them about the experience, the rivalries, the strategies, etc. would have made for much better TV than turning it into The Jeff Probst Show.

Speaking of which, Probst’s ego took him to daytime TV a few years ago, another classic example of some television executive making the mistake in thinking that someone who occasionally filled in for Regis Philbin on his morning show could helm a five-day-a-week daily hour of television. The problem with Probst’s show was that it was nothing more than the usual daytime pablum, and he’s not interesting enough as a personality to overcome that and entice viewership. Thus, the ratings sucked and the show’s torch was extinguished when it was voted off the schedule.

In the 14 years “Survivor” has been on the air, Probst has risen from a hired-hand host to an executive producer of the show, with a say in many of the decisions of who will be cast, which twists will be added, and what each season’s theme will be. He has earned that, certainly, and many of the decisions he and the other people behind the scenes have made were correct.

But the most important decision CBS and the “Survivor” showrunners should make now is to check Probst’s ego and rein it in — before he names one of the tribes after himself.

* Until tonight, I’d managed to avoid everything Tyler Perry has created for screens large and small, including his ridiculous Madea character. That string has now been broken, and for no valid reason, by Probst.