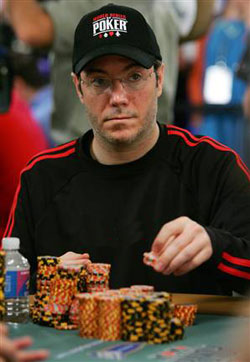 In Vegas this weekend, I played a lot of poker, including one session with Jamie Gold, who won $12 million as champion of the WSOP Main Event two years ago.

When I heard he was in town for a promotional appearance and was playing in a cash game at the Hard Rock’s new Poker Lounge, I made my way over there and got a seat at the table, where there was plenty of money being pushed around. We didn’t get tangled up in any big pots, but we did talk between hands.

I asked Gold how often he goes out to play in live games like this. He said it’s not that often, but he plays in a home game in Hollywood with several guys who have more money than anyone else he knows and with stakes higher than he can get regularly in a casino. Plus, in their private venue, they don’t have to worry about gawkers and other distractions — and can eat and drink whatever they want.

When I told Jamie that Dennis Phillips (chip leader going into this year’s WSOP Main Event Final Table on November 9th) is a friend of mine, he offered to talk to Dennis and give him an idea of what life will be like if he emerges victorious. One change, Gold explained, is that winning the WSOP and appearing on “High Stakes Poker” on GSN have put a target on his back and forced him to modify the way he plays. He can’t bluff as much as he used to, with other players coming after him more aggressively because they want to beat a former World Champion.

On the other hand, Gold claims that cash game players tend to give him their money more easily, because they never believe he has a real hand. I witnessed at least two examples of this, when players called him down with inferior hands and pushed big stacks in his direction. I also saw him make a couple of good reads. He didn’t impress me as much as other pros have, but it was interesting to watch (I won a few big pots of my own, so I was in a good mood, too).

I mentioned that it was odd seeing so many weeks of ESPN’s coverage go by without even a shot of Dennis until this past Tuesday. Gold said that’s like the story line they set up about him, as if he came out of nowhere on the last day of the Main Event when, in fact, he’d become chip leader on Day 4 and never relinquished that lead. But, after all, they’re producing a heavily-edited TV show, with stars to promote, stories to tell, and suspense to build.

As for the Hard Rock Poker Lounge, it’s nicely designed and has some of the most comfortable chairs I’ve found around a poker table. The music is pounding, the staff and players are younger than in other rooms, and there’s a much more relaxed atmosphere, which explains why the players at one table were using a Magnum condom as the dealer button. On the other hand, the younger, less experienced players have attracted the attention of some of the local sharks, who prey on those smaller “fish.”

The Hard Rock will be the site of a charity poker game and party two nights before the WSOP Final Table, in which Dennis will play with some big-name pros and celebrities. I’m looking forward to it.