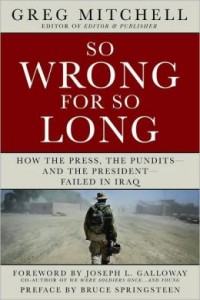 This weekend marked the 11th anniversary of the Iraq War, an occasion that wasn’t noticed by many in the media. Then again, most reporters and news executives weren’t doing their jobs as objective observers in the run-up to the war in 2003. Instead, too many of them served as cheerleaders.

Greg Mitchell was editor of Editor and Publisher at the time, and remembers how many news outlets, including the NY Times and Washington Post, became part of the pro-war propaganda machine. He recently updated his book, “So Wrong For So Long: How The Press, the Pundits — and the President — Failed on Iraq.” We looked back when he joined me on America Weekend.