Imus In The Mourning 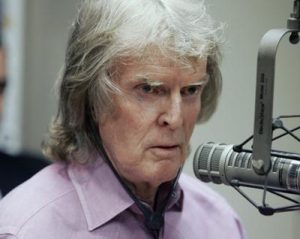 Several people asked me this weekend if I knew Don Imus, the Radio Hall Of Famer who died Friday at 79.

In the mid-1980s, we both did morning shows for NBC Radio — Imus on the AM, me on the FM — but, despite both having offices on the second floor of 30 Rock, we never crossed paths. And yet, I knew him, because I’d heard him on the air for years.

When I was in high school in the early 1970s, there were three radio personalities my friends and I listened to daily. One was Jean Shepherd, whose WOR show was a nightly course in the art of brilliant storytelling. In the afternoon, there was WABC’s Dan Ingram, the greatest Top 40 disc jockey of all time, who I eulogized here when he died last year. In the morning, there was Don Imus on WNBC.

At the time, Imus was a DJ, too, but he wove in characters and bits the likes of which we’d never heard before. He was assisted by Charles McCord, the newsman who’d been randomly assigned to his show when NBC hired Imus from WGAR/Cleveland. McCord became not just the news guy, but also the straight man/second banana who also wrote many of the comedy bits and served as the voice of reason, often challenging or pulling Imus back from the brink when he was toeing the outrageousness line. Their chemistry on “Imus In The Morning” served as a model for lots of morning radio personalities who followed (many of whom adopted the “…In The Morning” moniker — including me).

As the years went by, Imus struggled with booze and drugs, and his on-air temperament changed. Eventually the happy, funny disc jockey morphed into the cranky on-air curmudgeon, the aging white guy who was no longer on the leading edge of risky radio — particularly once Howard Stern came to town, first in afternoons on WNBC and then as direct competition to Imus on WXRK. By the time Imus worked under new management at WFAN, he’d turned much more political and opened his studio to guests like Tim Russert, Dan Rather, and Mike Lupica, who made regular appearances, as did newsmakers and lawmakers from both parties. Imus bantered with them intelligently but often bared his teeth and targeted them for verbal abuse, which soon became a greater part of the act.

I’ve never been a fan of name-calling and cheap shots, regardless of the recipient. While powerful, public figures may have been worthy of Imus’ occasional ire, I hated it when he punched down, making fun of people who didn’t deserve it at all (e.g. the Rutgers’ women basketball team). Too often, those attacks were laced with racist, homophobic, and misogynistic comments. I don’t know whether Imus was purposely upping the ante to try to win back the shock jock crown or if his conservative cantankerousness was a factor of his age, but it was off-putting to me and many others.

I had one well-known talk-radio consultant and two local-station program directors tell me in the 1990s that one of the dirty little secrets of Imus’ radio career was that, despite being syndicated to maybe a dozen stations, he was never very popular outside the northeast. While he continued to get high enough ratings for New York’s WFAN (and later WABC) and Boston’s WEEI to sell commercials on his show for big bucks, other stations that carried his show (in markets like Washington DC, Milwaukee, and Atlanta) were never able to duplicate that success and ended up sorry they’d bothered. And though his radio show was simulcast on MSNBC and Fox Business Network, it never had huge audiences on TV, either — not to mention the period he was carried by RFD, a network virtually no one even knew was a thing.

There’s still part of me that remembers Don Imus as a paradigm-changing morning radio personality, and I certainly admire his charitable efforts, particularly on behalf of children with cancer. Yet I can’t say you’re being unfair if your view of his radio legacy is based on the many vile and hate-filled things he spewed (and encouraged other staffers like Bernard McGuirk to say) in his last couple of decades on the air.