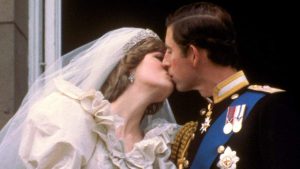 There will be myriad stories tomorrow marking the 40th anniversary of the wedding of Prince Charles and Lady Diana. All of them will make me sick to my stomach.

Not because the marriage broke up. Not because she died tragically in an automobile accident. Not because he’s still not king, a promotion he’s been waiting for literally his entire life.

No, my revulsion stems from my intense dislike of all things royal. I don’t understand why Americans, whose country was born when it broke away from the British monarchy after a prolonged war, still obsesses over its do-nothing titleholders.

It bothers me even more when I see little girls encouraged to dress up and act like princesses, hoping to live a fairy tale life with a prince. For decades, pop culture has pushed this narrative in movies like “Cinderella,” “The Princess Diaries,” “Charming,” “Mirror Mirror,” and “Sleeping Beauty.” Those five are a very small percentage of the too-many titles in that genre, in which a young girl’s life is changed for the better by falling in love with the scion of a regal family. Just look at the imagery embedded in much of the output from Disney — the company that has pushed this fantasy so often its logo is a castle!

I find nothing to respect about the British royals or anyone else famous just for being famous, whether their names are Kardashian, Hilton, or Windsor. They contribute nothing to society, live the high life at the expense of taxpayers, and — at least in the UK — have no say over the laws or leaders of their land. They are mere figureheads.

But that’s in the present tense. In the past tense, the British royal family was responsible for colonizing vast regions of the world. Between the late 16th and early 18th centuries, British monarchs imposed their will on nearly a quarter of the globe with little regard for the indigenous cultures and societies their forces rolled over. Look no further than the Middle East to see the sad remains of that imperial imprint to this day. Or the Caribbean, a hub for the slave trade between Africa, Europe, and North America. Yet even in nations like ours — which finally cut those ties — there remains this odd fascination, bordering on awe, which I find nauseating.

Of course, the British royals were not the only ones whose evil actions impacted people around the globe. Much of the same could be said about the family dynasties in the rest of Europe, as well Africa, Asia, whose totalitarian rule destroyed the lives of those without the approved lineage and pedigree. Yet you don’t hear about young American girls dressing up as a Japanese empress or boys play acting as the king of Eswatini (the former Swaziland).

On the day Diana and Charles were married, I lived in Meriden, Connecticut and did the evening show on WHCN/Hartford. My old friend Bill had driven up from Long Island to visit for a couple of days. He wanted to wake up early that Wednesday morning to watch the wedding.

Because I worked at night and couldn’t have cared less about such pageantry, I planned to sleep late and miss the pomp and circumstance. Then I realized I couldn’t — I had to get up and watch so I could talk about it on my radio show that night. It was just one of many sacrifices I made of my free time to stay plugged in to current events over the years, even those I had zero interest in.

I still remember the reverent tone of the TV coverage of the royal wedding across every network. Many of the anchors acted as if the couple were members of their own family and described the goings-on with a mixture of adoration, envy, and idolization.

There will no doubt be more of that tomorrow, even as it’s mixed with the follow-ups on the divorce and death that followed. There will likely also be updates on the offspring of Charles and Diana, whose lives have similarly been turned into tabloid fodder and promoted as if they mattered.

They didn’t, they don’t, and they won’t.