I Gave Bill Maher A Chance And He Blew It 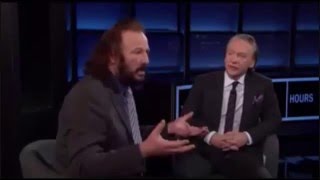 It has been a year since I wrote a piece called “I Won’t Watch Bill Maher Again.” The tipping point was Maher’s continued anti-vaccination stance, which is dangerous. But a year later, I decided to give Maher another chance on Friday night, hoping to see some clever comments about the presidential election season and hoping to avoid the pseudo-science he has spewed far too often for my taste.

It didn’t take long for him to disappoint me. Right after the monologue on his HBO “Real Time” show, Maher sat down for a one-on-one with Samir Chachoua, who claims to have cured Charlie Sheen of AIDS through a therapy he invented that involves drinking the milk of arthritic goats (I’m not kidding!).

My skeptic radar went up immediately, and started pinging like crazy when the “doctor” claimed he was the victim of a conspiracy by the medical establishment to keep his therapy from reaching the general public. Of course, he never explained why mainstream science would want to keep an effective AIDS cure secret — especially if there’s money to be made from it. Watching him answering Maher’s softball, total-bullshit-believing questions, I was sure Chachoua had never had his work peer-reviewed or published in a reputable medical journal, and was more than likely duping not-so-bright rich people into paying him huge amounts for his “cure.” I also doubted that Sheen had given Chachoua permission to discuss his private medical information on national television — a clear violation of the HIPAA law.

I knew that this televised nonsense would not escape the scrutiny of renowned science blogger Dr. David Gorski at the Science Based Medicine website — and it hasn’t:

Maher, for his part, does inject a little “skepticism” when he asks, in essence, how come nobody else knows about this if it’s so great? Interestingly, as is so often the case (I’m talking to you, Stanislaw Burzynski), Chachoua has a lovely conspiracy theory in which he claims UCLA and Cedar-Sinai Medical Center “came courting” him to test out his work in the mid 1990s, which might actually be true given that the NIH was at the time being politically pressured to examine alternative cancer cures. As is the usual case, this collaboration, if it ever happened, didn’t turn out well. If you believe Chachoua, “they published it on their own and buried it.” Well, certainly there are no publications by Chachoua about it. Searching PubMed didn’t turn up anything. There is another Chachoua who has published about AIDS, but it obviously isn’t Samir Chachoua…

In the past, I’ve said that nothing Maher could say or do would surprise me anymore. I was mistaken. As highly critical as I’ve been of his promotion of antivaccine pseudoscience and outright quackery, even I never thought he’d fall for such an obvious cancer quack hook, line, and sinker like this or that he’d let this quack repeat such obvious misinformation, all while admiringly lapping it up.

Gorski gets into the details of what Chachoua claimed on both “Real Time” and the “Dr. Oz” show — and then dissects every piece of it to expose the pure quackery. While scientifically dense, Gorski’s piece is well worth your time.

You may also be interested in this piece by another science blogger, Dr. Steven Novella, who not only mocks Chachoua’s claims, but explains why anyone would fall for them:

Apparently this quack also pulled a dramatic stunt – he reports that he injected Sheen’s blood into himself, to show him how confident he was that Sheen was cured. No reputable doctor would ever do this. This was a clear stunt, and only demonstrates how desperate the con artist was to convince his celebrity mark. He knew what was at stake – and it worked.

In addition he claims lab tests that show Sheen is HIV negative, and claims the first cure of HIV in an adult. Without independent verification, this is worthless, of course. Fake lab tests are all just part of the con.

Another part of the psychology here is that people want to feel that they are one-step ahead of the herd. Getting standard treatment available to everyone just seems so mediocre. If, however, you do “research” and find that there is a reported better option, that you can get a treatment that is safer or more effective than the regular treatment, that has a huge appeal. You can congratulate yourself on your cleverness and ingenuity, your open-mindedness, and your wisdom in seeing how corrupt the system is. You are not only one of the enlightened few, you will use your knowledge to cure yourself.

This view also creates a massive disincentive to ever admit that you were wrong. Admitting error, even when the disease that could have been cured or managed by modern medicine is now ravaging your body and killing you, is just too difficult. You would have to abandon your entire self-image. You would have to admit that you were not being clever, wise, and open – just naive and desperate.

Con-artists know this and count on it.

Dr. Novella will join me tomorrow at 1:35pm CT when I fill in on KTRS to discuss this further.

As for Maher, I’m back to not watching him. Like the milk of arthritic goats, he’s offering something I just won’t swallow.