The death of Howard Hesseman this weekend has me thinking about the first time I saw him, on the premiere episode of “WKRP In Cincinnati” in September, 1978.

Only months earlier, I had left college to take my first commercial radio job, and now here was a TV show about that business. I was hooked on the show after just a few minutes, mostly due to Hesseman’s performance as Dr. Johnny Fever, the station’s always-exhausted morning man.

I had done a lot of morning shows while in college. Since dorm life rarely calmed down before 1am or 2am, I couldn’t get up to attend classes before noon. But a couple of times a week I could get to the campus station in time to sign it on at 7am and do a three-hour show by myself, then spend the rest of the day bleary-eyed. So, I could relate to Johnny’s need to sleep whenever and wherever he could, including during meetings in the office of Program Director Andy Travis (Gary Sandy).

Later in my career, I spent 15 years getting up even earlier to host morning shows that lasted from 5:30am to 10am. People would ask me what the secret was to working a schedule like that, and I always answered, “There’s no secret except always being tired.”

Hesseman, who had spent some time as a DJ (using the name Don Sturdy), obviously knew the job, and was fairly representative of the kind of upbeat morning personalities that ruled the airwaves in the late 1970s. “WKRP In Cincinnati” was at its best when its focus stayed on Johnny, Andy, Tim Reid’s Venus Flytrap, and Loni Anderson’s Jennifer Marlowe (although I quickly developed a crush on Jan Smithers as Bailey Quarters). It was less engaging when it went off on tangents, with plotlines centered on newsman Les Nessman (Richard Sanders), or station manager Arthur Carlson (Gordon Jump), or a two-episode arc revolving around a reality show about sales manager Herb Tarlek (Frank Bonner) and his wife Lucille (Edie McLurg) at home.

Having spent many hours in broadcast studios, there were several aspects of the WKRP operation that I knew were wrong. For instance, Johnny never wore headphones. Everyone in radio not only had them on during shows, we each had our own preferred brand. My early favorite was the Koss Pro-4AA, a headphone which fit over the ears so tightly it was known in the business as “the head crusher.” Later, I switched to the Sennheiser HD-515, a headphone so lightweight and resilient I used it for more than three decades, only changing out the ear cushions every few years. Surely, Johnny would never have worked without his favorite equipment.

Not only that, but he cued up vinyl records by sight, dropping the needle down and guessing where a song started. I knew that was wrong. And I noticed that — in the famous scene above where Andy told Johnny to dump the station’s elevator music format and start playing rock and roll — the needle skipped into the label in the middle of the record, which would generate no sound.

But I didn’t care.

The rest of the props in the WKRP studio looked genuine, from the commercial cartridges to the rack of records to the control board, and the two 16″ felt-covered turntables. Most realistic of all, everything looked run down from years of use, just like the equipment at WRCN, the station where I made my professional debut (I wrote about the interview that launched my career here). 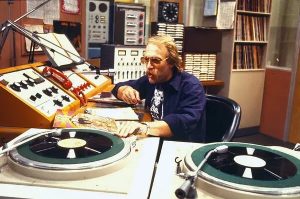 I watched every original episode of “WKRP In Cincinnati” over the next four years, including its heartfelt tribute to the fans who died at a 1979 concert by The Who at Riverfront Coliseum and its legendary Thanksgiving episode, “Turkeys Away.” I can still remember sharing some of the episodes with my then-teenage daughter, who at one point went around the house singing the jingle for Red Wigglers, “The Cadillac Of Worms.”

I was slightly less enamored of the syndicated “New WKRP In Cincinnati,” which lasted a couple of seasons in the early 1990s. Its problem derived from the fact that Hesseman, Sandy, Anderson, and Smithers weren’t in the cast, so it centered on the secondary characters (Nessman, Carlson, and Tarlek). That was a mistake you’d think producers would have learned from the failure in the 1980s of “After M*A*S*H,” which tried to get by with stories about such second-tier characters as Col. Potter, Max Klinger, and Father Mulcahy.

The producers of the WKRP reboot should also have known that neither the radio or TV versions could be a success without Howard Hesseman as Dr. Johnny Fever, broadcasting from the Flimm Building while shouting “Booger!” over the airwaves.