History of the National Lampoon 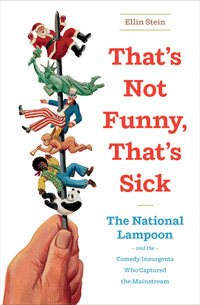 When I was in high school, the only two pieces of mail I looked forward to receiving were birthday cards from relatives with a $5 check inside and the new issue of National Lampoon. The magazine was born just as I entered its target demographic — teenage boys who were outgrowing Mad magazine. I devoured every issue and knew the names of its best writers: Chris Miller, Doug Kenney, Tony Hendra, and Henry Beard. I memorized the bits Christopher Guest did on the Lampoon’s “Radio Dinner” record, and wished I’d been old enough to see its off-Broadway show, “Lemmings.” After several years, either my taste in comedy had changed or the magazine got tired, but then its creative team made a move into movies with a little production called “National Lampoon’s Animal House,” and they had me again.

These days, the only time you see the National Lampoon brand name is on lame movies that show late at night on cable, with names like “National Lampoon’s Dorm Daze” or “Surf Party,” so a whole generation of American kids has no idea what the Lampoon could and did do.

That’s why I invited Ellin Stein to join me on America Weekend today. She has written a history of the Lampoon, “That’s Not Funny, That’s Sick.” We talked about how the magazine started, the impact it had on our culture, why the original movie concept was rejected by everyone, and how other famous names — like John Hughes and Jeff Greenfield — became part of Lampoon lore.