Here’s To You, Wendy! 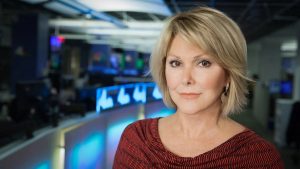 I first noticed Wendy Rieger in the late 1980s when I was hosting a successful morning radio show and she was a reporter for WRC-TV, the NBC owned-and-operated station in Washington, DC. Some tropical storm or hurricane was threatening the area, and Wendy was reporting live from the eastern shore of Maryland — in the water, wearing hip boots, as the wind and waves lashed at her legs, with the cord from her microphone dangling precariously. It was such a startling visual that I had to talk about it on my radio show the next morning, which brought calls from several listeners who’d seen her and loved what she’d done, too.

I tracked Wendy down, got her on the air by phone, and quickly discovered that, in addition to being a great reporter, she was as smart, quick-witted, and funny as I’d suspected. Over the next several years, Wendy guested on my show many more times, often coming into the studio to spend an hour or so discussing items in the news or just joking around. She never asked ahead of time what we’d talk about, and I was never sure, either, but it always worked and we had a wonderful rapport.

I’m telling you this because I just read an appreciation of Wendy by Paul Farhi of the Washington Post upon her retirement from television after four decades on the air, including a long run at the WRC anchor desk. Having lost touch with her when I left town, I didn’t know she had open-heart surgery last year, nor that she needed surgery to remove a tumor from her brain a few months ago. Fortunately, she survived both health scares, and now has begun a new life with her new husband that requires neither of them to go to work every day — a lifestyle choice my wife and I also made a few years ago.

Congratulations, Wendy — and here’s to you!

Updated 4/16/22…So sad to hear that Wendy didn’t get to enjoy retirement long enough. She died today at a hospice of glioblastoma, a form of brain cancer.