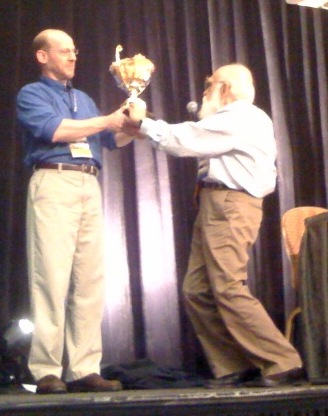 That’s a shot I took with my iPhone at The Amazing Meeting in June of Dr. Phil Plait making a presentation to James Randi — a bowl full of envelopes containing messages from the 900+ attendees about how much Randi has meant to them and to skeptics everywhere.

Today, the James Randi Educational Foundation announced that Phil has been named President of the organization, as Randi steps up to Chairman of the Board of Directors. This is a perfect position for Phil, who gained renown as The Bad Astronomer and has, through his public appearances and his hugely-popular blog (now part of Discover Magazine), become one of the leading advocates for science and reason and the skeptics movement. He’s also, as far as I know, the only person who has been on stage as a speaker at all six Amazing Meetings.

As a member of JREF who is proud to call both Randi and Phil my friend, I congratulate them both on helping to take the organization to the next level, giving a new generation of skeptics a role model of its own, and ensuring that the fight against frauds and fakers will continue.