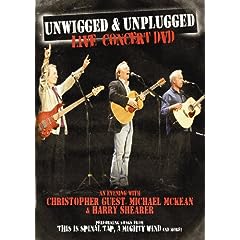 Harry Shearer, Michael McKean, and Christopher Guest went on tour earlier this year — not as Spinal Tap or The Folksmen, but as themselves singing the songs their fictional alter egos had made famous in “This Is Spinal Tap” and “A Mighty Wind.”

Unfortunately, I didn’t get to see them because the tour didn’t make a stop in St. Louis. Fortunately, they hired a crew to film one of the shows, which has just been released on DVD.

Shearer joined me today on KTRS/St. Louis to talk about the “Unwigged and Unplugged” concept, how they adapted the songs for their stripped-down stage performances, and why they got into a legal tussle with “the Lego people” over whether a fan’s YouTube version of a Tap song could be included on the DVD. I also asked him about the reaction of real rockers they’ve performed with, where things stand now with his day job as one of the key voices on “The Simpsons,” and whether Guest has come up with a concept for their next movie together.