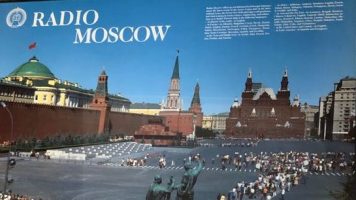 The first of my live radio shows from Moscow was about to begin, and I was freaking out.

In the years I did the morning show at WCXR/Washington, I was used to working in close quarters with my crew at our home studio, located in the courthouse building in Alexandria, Virginia. I ran the board, which was in front of me. John Ogle, my news guy, was in a booth in the corner separated by a window. Dave (The Predictor) Murray, my sports guy, was on my right, behind one of the turntables. My producer, Leigh Leventhal, sat behind me, pulling commercials and answering phones, aided by whatever intern was working with us that semester. Everyone had microphones that were always on when mine was, and a green light to say anything at any time. We’d been together for long enough that everyone understood their role, we had a wonderful chemistry on the air, and a very large, faithful audience.

But on this day in June, 1989, nothing was cozy, nothing was familiar. John, Dave, and I were sitting in a studio at Radio Moscow that was way too big for us. In fact, it was large enough to fit an entire symphony orchestra, for whom the acoustics had been calibrated. We had microphones in front of each of us, plus a couple more set up for guests, but even before we went on the air, I could hear the cavernous echo of my own voice. I asked one of the Russian engineers if he could roll in some portable baffling I’d seen in the hallway, which he did, surrounding us but not really making me feel more comfortable.

He went back into the control room to join two others who’d been assigned to work on our broadcasts. They spoke very little English, and I spoke even less Russian, but they were very nice and tried to be helpful. The most striking thing I noticed in there were the open reels of audiotape they’d threaded through one of their tape machines. In the US, reels like this had a metal exterior on both sides to hold the magnetic tape in place, but the Russian versions were just flat pancakes with nothing to keep the brown tape from unspooling. Fortunately, the engineers had plenty of experience with it, and were going to record everything we did for use on a later Radio Moscow broadcast.

Back home, my friend Mike Kelly, the WCXR midday guy, was in our Alexandria studio, running our control board and acting as my liaison to America. He was also our fail-safe — in case the satellite feed dropped out, he could keep the show running and make sure the commercials ran. I told the Soviet engineers that I’d make their job really easy. All they had to do was turn on all of our microphones and never turn them off, no matter what. That way Mike could always hear everything we did, on the air and off.

Then it happened. Five minutes before I would speak my first words of these historic broadcasts, I couldn’t think of a thing to say. My mind was completely blank. This had very rarely occurred in my on-air life, as I was not often at a loss for words, but now I had nothing.

Knowing Mike was listening, I leaned into the microphone and told him my problem. He was our everyman, our Homer Simpson, our suburban dad that everyone could relate to. Mike was (and is) the kind of guy who, if you didn’t like him, there was something wrong with you. And that morning, he was my hero.

Hearing the wavering in my voice through his cue speaker, Mike pushed the talkback button in the WCXR control room and asked me three questions: “Have you seen anyone mowing their lawn? Any kids shooting baskets in a playground? How’s the traffic?”

Boom! That was all it took. My brain kicked into gear as I realized that what people at home — perfectly personified by Mike — wanted to know was what life was like for their counterparts in the Soviet Union. Moments later, he faded down whatever song was playing, hit the pre-recorded introduction announcing that “Harris In The Morning is live from Moscow!” and I welcomed our listeners into our odd temporary world. For the next three hours, John and Dave and I shared observations from our first day and a half inside The Evil Empire (a phrase that made the Russian engineers sit up straight until they noticed we were smiling as we said it). We talked about the flight over, what it was like getting through customs, how empty of vehicles the big broad boulevards were, what our hotel was like, etc.

Leigh, in the studio at home with Mike, had managed to fax us some news articles from The Washington Post and USA Today, but we barely mentioned them because I realized we had so much else to talk about and decided all of our content would be about our experiences in Moscow. Leigh was truly relieved when I told her she wouldn’t have to do it again the next day, because the process of getting those stories through to the sole fax machine in the Radio Moscow building had been overly laborious.

At some point, a Radio Moscow official showed up with a guy who was trying to introduce baseball to Russia. I told him to sit down and through our translator, asked him a few polite questions until Dave jumped in with, “Is your team any good?” After the translation, the guy stammered, “Well, um….” Dave interjected, “We don’t have a major league baseball team in Washington, so we have to root for the Baltimore Orioles, who lost their first 21 games in a row last year. You’ve gotta be better than that, so you’re now my favorite team!” John and I laughed, then watched the Russian listening to the translation, shaking his head in disbelief before finally smiling and giving Dave a thumbs up and an “Okay!”

We laughed so hard I told Mike to go to a commercial, during which he pushed the talkback button again to say, “Now, that’s how you do it!”