Hail, Hail, The Cabs Weren’t There 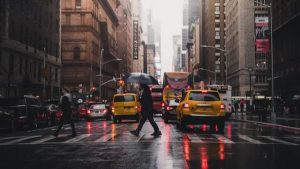 The streets of midtown Manhattan used to be filled with yellow taxis, but their numbers have been drastically reduced — both by the pandemic and the rise of Uber and Lyft. I asked my longtime friend Bill, who’s in the transportation business, for an explanation.

He told me that, even before COVID, many cabbies found themselves upside down financially after buying the legally-mandated medallions at highly-inflated interest rates. It was bad enough three years ago, but the virus kept so many people off the streets and sidewalks for nearly two years there was no way for the drivers to earn enough to cover expenses, let alone make a living. Large numbers of them got out of the business entirely, while others abandoned their yellow cabs in favor of driving private vehicles for ride-sharing companies.

On our recent trip to New York, the shortage of hacks affected our ability to hail a cab, even outside of rush hour. We tried using Curb, an app the taxi commission created to allow riders to order yellow cabs as they would a Lyft or Uber, but without surge pricing. We attempted it several times, yet were never able to get a taxi to actually show up. We also had difficulty ordering a Lyft without a long wait — sometimes as much as 20 minutes, if they even got to us — and couldn’t pre-book a ride, either. And when it rained, as it did for two of the days we were there, the odds of hailing anything were even worse.

Thus, we ended up using the subway system, which I have always preferred because it is usually quicker than any above-ground transportation — and at a better price. Even during rush hour, it was never so packed that we couldn’t get on a train. I have a feeling that has to do with so many people working from home and thus not commuting to the skyscrapers that make up the New York skyline.

It’s probably going to take a few more years for New York City to be back at full capacity, in every sense. I’ve been asked by friends if, now that we’re retired, we’d ever consider moving there permanently.. I always answer no, because the cost of living is far too high compared to the St. Louis area. My daughter’s rent for her 200-square-foot studio apartment is more than the mortgage payments we make on our entire house. Besides, there’s only a certain amount of urban racket my lifelong suburban ears can put up with.

The sad thing is that if my daughter moves elsewhere this summer — as she’s planning — it will be the first time in more than sixty years that I won’t have at least one immediate family member living in that tri-state region.

I’m sure we’ll find reasons to go back every once in a while to take in some Broadway shows. Whether we’ll be able to find anyone to drive us from point to point is another question entirely.