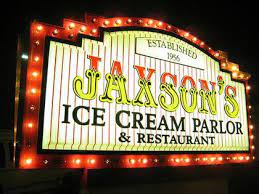 During our south Florida vacation, a friend introduced us to Jaxson’s Ice Cream Parlor, which has its own line of ice cream (50+ flavors) and its own brand of half-pound hot dogs! The place is so popular, there’s almost always a line of people ordering cones and cups at the front window, with more being served at tables inside. Jaxson’s is also famous for The Kitchen Sink, a ginormous dessert consisting of four gallons of ice cream, plus whipped cream, sliced bananas, nuts, and a cherry — with a sparkler or two on top.

No, I did not order one.

I met the owner, Linda, whose father (Monroe Udell) opened the place in 1956, when he was told by local authorities they would not issue a business license to anyone who was Jewish. To get around that, he told them his name was Jaxson (spelled with an X just to be different and seem more southern). For a long time, he kept his religious beliefs secret — the restaurant never closed on Rosh Hashanah or Yom Kippur, for instance.

He got the approval, but had to promise not to hire any Black people because of the Jim Crow laws on the books and active KKK chapters in the area. Monroe nodded his head yes, then made his first hire a Black woman, who went on to run his kitchen for two decades. But it wasn’t until after the Civil Rights Act of 1964 was signed by LBJ that her presence became known to the public.

I love that story, as well as the kitschy atmosphere at Jaxson’s and the display up front of old-time candies like Chuckles, Razzles, and foot long Tootsie Rolls. We went back a couple of times.

While such blatant anti-Semitism and racism may not officially be on the books anymore, it’s still around in other forms, and has unfortunately been on the rise again in recent years. For example, we know lots of St. Louisans who, when they vacation in Florida, go to Destin, a beach community in the far western part of the panhandle near the border of Alabama. When I have mentioned that we prefer the warmth of south Florida, more than a few of them have responded, “Oh, we hate it there because there are so many New Yorkers.”