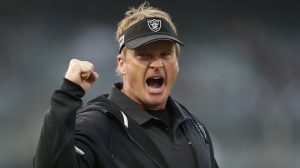 The thought that kept going through my head last night while ESPN was reporting on Jon Gruden’s ouster as head coach of the Las Vegas Raiders — because of a slew of racist, homophobic, and misogynistic emails he’d sent over a 7-year span beginning a decade ago — was, “That’s when he worked for you!”

For much of that time, Gruden was an analyst on the network’s “Monday Night Football” telecasts, and appeared on several other ESPN shows each week. It’s highly unlikely he wasn’t using similarly offensive language around his coworkers. Anyone who spews that sort of hateful rhetoric does not only do it in private. I bet stories will emerge in the coming days about other ESPN employees who heard — or were the targets of — Gruden’s ugly words, but didn’t feel they could speak up about such a powerful member of the broadcast team.

In the statement he released last night after his “resignation,” Gruden said, “I never meant to hurt anybody.“ Bullshit! That’s exactly what hate speech is designed to do. It would have been bad enough if he’d stepped over the line a single time, but Gruden established a pattern of virulent, unacceptable behavior that no workplace would allow. Certainly not a league in which 70% of the players are Black, and have for the last few years been allowed to wear anti-racist slogans on the backs of their helmets.

Naturally, because white supremacy and homophobia are right on brand for them, right-wing media figures and Twitter trolls almost immediately hailed Gruden, claiming he was a victim of cancel culture. Try telling that to Colin Kaepernick, who was essentially banned from the NFL for protesting racism by taking a knee, while Gruden was signed to a coaching contract that paid him $10 million a year.

I won’t be surprised if there’s some effort to draft him as a GOP candidate for Congress, with a full endorsement from Tucker Carlson.