“Good Luck To You, Leo Grande” 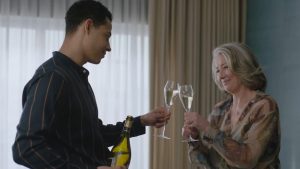 Leo Grande (Daryl McCormack) is a sex worker hired by Nancy Stokes (Emma Thompson), a widowed former teacher who was never satisfied by her husband. Now, she wants to experience what it’s like to be with a man whose job is merely to give her pleasure. But when they rendezvous in a hotel room she’s rented for the night, Nancy gets anxious and can’t go through with it. Leo doesn’t pressure her, and they spend a half-hour or so just talking.

That’s the first layer of the onion peeled back as the movie progresses. Nancy opens up a bit as she connects with Leo, while he refuses to reveal much about himself. Their verbal — and later, physical — interplay forms the entire basis of the horribly-named “Good Luck To You, Leo Grande.”

This is a movie that could easily have slipped into exploitation if not for the presence of Emma Thompson, one of the best actresses of her generation. Nancy’s sexual awakening could also have been played for laughs, like Matthew Broderick’s scene with Park Overall in “Biloxi Blues.”

Thompson clearly had a role in shaping how the Nancy-Leo relationship develops, working with director Sophie Hyde to slowly reveal more of this uptight woman as she learns to open up. Thompson also deserves credit for allowing herself to be filmed in full frontal nudity, as the final layers of her onion are pared back.

It’s also nice to see an older woman/younger man dynamic — Thompson is 63, McCormack is 29 — although if the roles were reversed, the story might have seemed creepy.

“Good Luck To You, Leo Grande” has a staginess to it, as the characters spend almost all of the movie in that hotel room, and I wonder if writer Katy Brand intended this as a play. Either way, it kept me interested throughout, and I’m giving it a 7.5 out of 10.