Give It To Ken Already 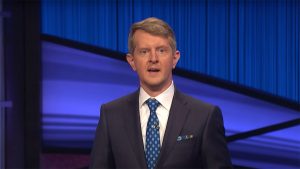 In November, I wrote a piece called “Just Give It To Ken,” urging the producers of “Jeopardy!” to name their best-ever player the full-time host of the show. They haven’t done that yet, splitting the duties between Ken Jennings and Mayim Bialik.

A couple of weeks ago at the Daytime Emmys — where “Jeopardy!” won yet again for Outstanding Game Show — executive producer Michael Davies said:

Okay, so let Bialik host the primetime “Celebrity Jeopardy” editions that will air Sunday nights on ABC this fall, or any other versions besides the regular, five-days-a-week shows that are the core of the success of “Jeopardy!” To that end, as I’ve written before, Jennings is the clear choice. Not just because he was so good at the player podium, but because he’s proven himself to be agile and quick-witted at the host podium, too — very much in the tradition of Alex Trebek.

My wife and I, longtime “Jeopardy!” viewers, lament whenever Johnny Gilbert announces Bialik is that week’s host. It’s not that she’s horrible, but it’s clear that while she’s an actress who can read lines off a teleprompter or the monitor embedded in the host podium, she has virtually no ad-libbing skills. Thus, she uses the same phraseology ad nauseam.

Among the things that drive us crazy:

Her fake surprise at the reveals of Daily Doubles, then always unnecessarily telling the contestant how much money they have (players can always see their scores) and asking, in the same way, every time: “How much would you like to wager?” The same is true during the reveals of “Final Jeopardy!” responses and wagers, which I think she’s reading off prompter, too.

“Jeopardy!” players are permitted to answer with just a last name, but the good hosts usually add the first name. For instance, if the clue is, “He was the first to run a sub-four-minute mile,” a contestant is considered right if they merely respond, “Who is Bannister?” But it helps the home viewers if the host quickly says, “Yes, Roger Bannister.” Bialik (i.e. Mayim) rarely does that.

She also doesn’t vary her confirmations of correct answers, usually saying, “That is correct.” Worse, she often pauses before ruling on a response, creating a moment that just hangs in the air and changes the pace of the show.

These may all seem like I’m nitpicking at minor offenses. Yes, I am. None of them — or all of them in aggregate — has stopped us watching and playing along every day. But they’re just annoying enough to get under our skin to the point we hope that Ken (who’s no longer obligated to “The Chase”) returns soon and stays at the “Jeopardy!” host podium for the long term.

This has been taking place during a “Jeopardy!” season with lots of “super-champions” who put together long winning streaks, like Amy Schneider (40 wins), Matt Amodio (38), and Mattea Roach (23). Thus, it would only fitting to make the show’s all-time super-duper-champion, Jennings (74!), the regular emcee of the proceedings going forward.