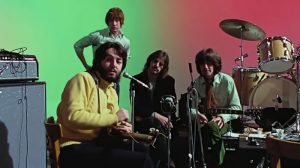 I’ve received several emails from readers taking me to task for my review of “The Beatles: Get Back,” which I only gave an 8 out of 10.

Several readers thought I didn’t offer enough praise for the scene in which John Lennon was late getting to the studio, so Paul McCartney — conscious of the time pressure to produce a dozen or so new songs in just a few weeks — came up with the basics of the song “Get Back” as Ringo and George looked on. Yes, it was impressive, but that’s what creating in real time looks like: sitting down and starting out with some notes on a guitar or piano, then building on that repeatedly, adding lyrics and chords along the way. Every songwriter, playwright, and painter has gone through that process from blank page/canvas to final product.

Creating something out of nothing is extremely challenging. I know from experience, because every day I hosted a radio show I had to think up new topics to talk about. There were myriad times I said to my wife, “I have nothing for today’s show.” Having heard this whining before, she reassured me, “You’ll come up with something. You always do.” And I did, because it was my job, just as it was McCartney’s job in that studio.

Sometimes the content that made it through the microphone was great, other times it was bad — just like McCartney. After all, while he’s the genius who came up with “Get Back,” “Let It Be,” and “The Long and Winding Road” during those sessions, he also had ideas that went nowhere which you’ve never heard because they ended up in some trash can. He even wrote stinkers that made it all the way through the recording process and onto vinyl — like “Let ‘Em In” and “Dance Tonight,” both of which I discussed in a post called “Truly Dumb Songs.”

One woman didn’t like my comments about the eight-hour documentary being too long. She says for huge fans like her, there’s no such thing as too much: “When you have footage of The Beatles, you show it all!!” Even Peter Jackson, who compiled the footage, wouldn’t agree, which is why he left out the other 52 hours shot by Michael Lindsay-Hogg in 1969. I don’t mind that he edited the original footage, only that he didn’t cut it down enough.

I’ve had prior experience with Too Much Beatles Syndrome.

In the 1980s and 1990s, I worked on music stations which, as a novelty, would offer a Beatles A-Z weekend, playing all of the Fab Four’s tunes in alphabetical order. They were the only band we could do that with. Oh, there were others with similarly prodigious outputs, but none with the uniform popularity of The Beatles among all demographics. That’s why you didn’t hear Rolling Stones or Grateful Dead or Fleetwood Mac A-Z weekends.

Because not every Beatles song was a hit, that meant playing many rarely heard on radio, a nice refreshing change. Yet even that brought in complaints from Beatlephiles, especially the individual titles that make up the medley on the second side of “Abbey Road.” We weren’t going to separate “Polythene Pam” and “She Came In Through The Bathroom Window” just so they’d go with the other songs that started with P or S. It would sound terrible to chop up the medley so each element started and ended abruptly. But that logical way of proceeding didn’t stop calls from listeners who thought we’d made a huge mistake. The DJ in the studio would have to explain our reasoning over and over.

It could have been worse. I once recommended to our Program Director that the second time we did it, we should make it a Beatles Z-A weekend, playing the catalog in reverse alphabetical order. He just shook his head as he stared at me silently until I got off his couch.