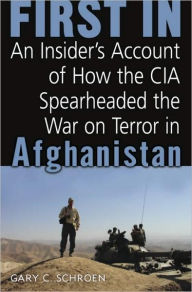 Gary Schroen, a 35-year CIA veteran who commanded the first American team on the ground in Afghanistan after 9/11, was on show today to talk about his experiences and his book, “First In.”

We talked about how the war in Iraq distracted from our efforts to get Osama Bin Laden despite the marching orders he was given to bring Bin Laden’s head back in a box (he says the government was “rash and reckless”), whether the Afghanis could control and defend their own country if we pulled out, his response to the allegations of torture and murder of prisoners by US military interrogators in Afghanistan, and the millions of dollars in bribe money he and his team of seven disbursed while fighting the Taliban in those first two months after 9/01. Another fascinating first-person story.