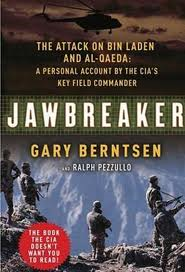 Here’s my conversation with former CIA field commander Gary Berntsen about his book, “Jawbreaker: The Attack on Bin Laden and Al Qaeda.”

We discussed his reaction to the release of a new Osama threat tape last week, and why we didn’t get Osama when we had him pinned down at Tora Bora in November, 2001. He revealed the huge payoffs he had to make to Afghan warlords and the Northern Alliance in our efforts to defeat the Taliban, and why so much of the material in his book was redacted by the CIA. I also asked him about the intelligence failures before and after 9/11, whether the CIA and FBI are playing nice now, and what still needs to be done to help the US intelligence community battle Al Qaeda.