From A Grandson of Immigrants, Welcome 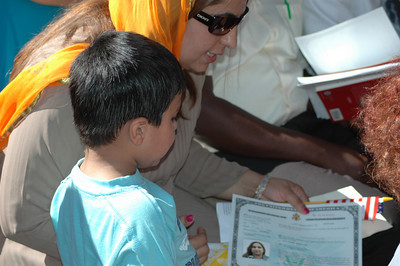 My brother Seth, the Deputy Secretary of Labor, gave the keynote address on July 4th at an event where some 50 immigrants from 34 nations took the oath to become citizens of the United States of America. This is the third time he’s been at a naturalization ceremony, and calls it “the most powerful expression of patriotism I’ve ever encountered.” The ceremony took place in Annapolis, Maryland, at the home of William Paca, one-time governor of the state and an original signer of the Declaration of Independence.

As with so many things he has done, I was very proud of the message Seth delivered as the grandson of immigrants to the overflow crowd that included his wife and sons. Here’s what Seth said to the newest citizens of the USA that morning:

On behalf of President Obama and Vice-President Biden, it is my distinct honor and great pleasure to welcome you into the citizenry of the United States.

I would like to begin by offering you an important tip about how to succeed as an American citizen. When you are watching the World Cup, the game is pronounced “soccer,” not “football.”

And, as Americans, no one will expect you to be good at soccer, but I encourage you to practice your baseball and basketball.

You arrived here from every region of our world — Ghana, Gambia, and Guatemala; Cameroon, Canada, and China; Pakistan, Peru, and the Phillipines; Trinidad and Tobago, and Turkey; and many, many other countries.

But like generations of immigrants and new citizens who followed the same path that brought you here today, now, you share a new home — this remarkable country we call America.

More than one hundred years ago, Esther Tauber, Pinkus Sheffer, Becky Plutt, and Morris Awerbach sat in ceremonies just like this one. They took the same oath you just took. And they felt the same excitement and satisfaction you are feeling this morning.

Esther, Pinkus, Becky, and Morris were my grandparents. They came from Eastern Europe to escape tyranny and to seek opportunity. They wanted the liberty and freedom that makes America a beacon to the world. They looked forward to their futures, but they worried about what awaited them in their new country.

As they raised their hands and crossed the threshold into American citizenship surrounded by other new citizens from around the world, I wonder, could they have dreamed that one day their grandson would be a senior official of the United States government participating in another naturalization ceremony?

America is a place where dreams like these can come true.

In America, we have no kings. We have no family titles. You cannot and should not be born into power in the United States.

In America, we all have the same rights and responsibilities — new citizens and old, those who were born here and those who travelled long distances to make this country their home.

In America, you have the right to worship as you wish and associate with whomever you would like. You have the responsibility to contribute to your community and to help make America even greater than she already is.

In America, you have the right to a lawyer if the government accuses you of a crime. But you have the responsibility to respect our laws and to give evidence if you see something that’s wrong.

In America, your property is your own, not the government’s, and your house is your castle, no matter how humble or grand. But you have the responsibility to pay your taxes and support your family.

America’s greatness lies in these powerful ideas. They are enshrined in our Constitution and Bill of Rights, and millions of your fellow citizens serving in our military services have defended them over the decades.

Men like William Paca risked their lives by proclaiming that they wanted a country governed by these ideas, not by a king ruling by fiat from across an ocean.

Our Founding Fathers, including Governor Paca, invented a new form of government for the modern era — as President Lincoln described it, “a government of the people, by the people, and for the people.”

This radical invention endures around the world today in countries large and small. And while we come from different backgrounds, and we eat different foods, and we hold a wide variety of beliefs, it is this idea — this American idea — that unites us as a people.

Today, July 4th, we celebrate those ideas and the courage of William Paca, his fellow patriots, and the generations since who have built and strengthened our country.

I have no doubt that Governor Paca, one of the very first Americans, would be greatly pleased to welcome you, our newest Americans, into his home.

In a sense, he is passing on our nation’s ideals to you. I hope you will safeguard and defend them, as he did.

The choices are yours. The opportunity to succeed is yours. And the risk of failure is yours.

I understand those words may be unsettling, particularly now. You are entering our nation’s citizenry at a difficult time for our country.

We are emerging from the worst economic recession in seven decades. Almost 15 million of your fellow Americans are unemployed. Six-point-eight million Americans have been unemployed for more than six months.

Certainly, new jobs are being created again, but we need even more jobs than have been created in the last few months. Our nation has returned to the path of economic growth, but this growth must be felt in the lives of ordinary working Americans, not merely in investment bankers’ board rooms and stock traders’ bonuses.

America will recover. We will continue on the road to prosperity. Americans are a resilient lot.

Your President, your Vice-President, and your Labor Department are working hard for working families like yours. So, while the choices, opportunities, and risks are yours, you do not have to face your challenges alone. Your government stands ready to help.

There are some in our society who want you to believe that your government is your enemy. But you know better. Some of you have come from places where that is literally true. The American government is not your enemy.

Because, when you get right down to it, your government belongs to you. You choose who runs it. You hold it accountable. You speak out and organize your neighbors if you disagree with it.

And, perhaps, one day not long from now, your grandchild, or your child, or you, will take a senior position like mine in the U.S. government.